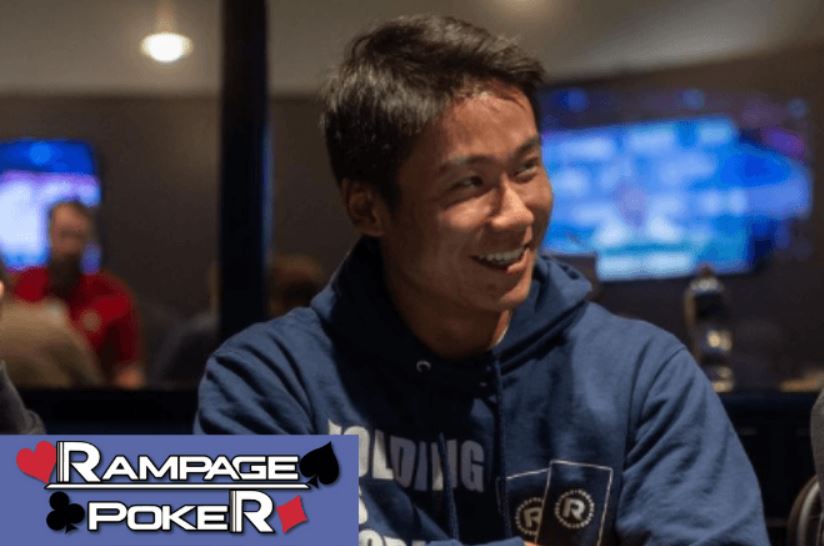 Ethan Yau, better known by his YouTube username “Rampage” or “Rampage Poker”, is an American professional poker player and poker vlogger. He was born in 1997 near Boston, Massachusetts.

He’s best known for his YouTube channel with over 100,000 subscribers where he posts his regular poker vlogs. In those videos, he usually plays cash games and tournaments in Las Vegas. As for tournaments, he has $252,000 in live cashes.

According to an interview Yau gave to The Whiteboard Finance Show on YouTube, he started playing poker at the same time he started vlogging: in January of 2018. A different source, a 2021 profile piece on Pokernews.com claims he was still in college (his major was in business) at the time, and he lost $500 in his first cash game session at a local casino that just opened up 30 minutes away from his college.

That is consistent with what he said in the aforementioned interview. In it, Yau claims that he mainly learned proper poker strategy through comments under his videos. Thus he didn’t have a deep strategic understanding of the game coming into his first session. For example, he risked $500 in a single buy-in while only having $3,000 total to his name. As he admits it now, that wasn’t proper bankroll management.

Yau has $252,172 in live tournament cashes, according to his Hendon page. That sum is the product of ITM finishes in just 9 live events over the course of 2 years. The reason for his low number of cashes is that Yau only started playing poker in 2018, and he solely focused on cash games for the first two years on the felt.

The first result on his profile is from October 2019. He came in 4th in a $160 No Limit Hold’em event at the Encore Boston Harbor Recurring Tournaments in Everett, MA and won a nice $1,800.

Yau’s biggest live tournament score to date is from October 2021. He took down the $1,100 No Limit Hold’em – Mid Stakes Poker Tour event at the DeepStack Championship Poker Series at The Venetian in Vegas. He pocketed no less than $230,379 for that victory.

Ethan Yau has won one WSOP gold bracelet so far.

In 2020, when all WSOP events were forced to be played online due to the dreaded Coronavirus pandemic, he took down the $500 NLHE Grande Finale event on WSOP.com for $164,494. He beat Brian Patrick from California heads-up for the title. His first bracelet win was a momentous triumph for Yau, as he saw himself as a cash game pro with little interest in tournaments at the time. This victory changed that perception of his.

All his WSOP cashes are from online events, he’s yet to make it into the money in a live tournament. Overall, Yau has cashed in 14 World Series events for a total of $187,737 combined.

For a long time, live No Limit Hold’em cash games were the main focus of Yau’s career. As we wrote above, when he started, he was playing live cash at a newly opened casino near his university in Massachusetts.

All his earlier vlogs on his channel are about cash game sessions. He started off playing $1/$2 NLHE, then gradually moved up to $5/$10 NLHE in the latest videos. The more recent videos were shot in Las Vegas casinos, such as The Wynn and The Venetian.

Also, Yau appeared on smaller live streamed cash game shows. In September 2021, he played stakes much bigger than usual, $25/$50 NLHE on a live stream from the Rounders Card Club in San Antonio, TX.

We’ve written about his online WSOP scores above. Aside from those, no online tournament result is known of his. On WSOP.com, he plays under the screen name “RampageP”.

Yau created his YouTube channel “Rampage” in January 2018. The oldest video currently available was posted on January 7th, 2018. It’s the first episode of his poker vlog. He was inspired by famed poker vloggers Brad Owen and Andrew Neeme to create his own video series.

According to his Social Blade page, his channel blew up in July 2020. That month he received about 1 million views on his videos, as opposed to the 200K he got in June. His monthly gained subscribers jumped from 1,600 to 8,600 in the same month.

Currently, he has 120,000 subs on his channel. In terms of views, he tends to be second behind Brad Owen among poker vloggers on Youtube week after week. His videos typically get between 100,000 and 150,000 hits on a consistent basis.

Two threads popped up on the popular poker forum Two Plus Two shortly after each other in August and September of 2021, accusing Yau of nefarious activities. One alleges he runs “a Ponzi scheme and fraud poker club”, while the other claims he runs an “illegal online poker network”. However, both of those threads were closed by moderators due to lack of evidence.