Poker King Club has announced the postponement of the Poker King Cup Macau 2019, originally scheduled from 15th to 21st March 2019, until further notice. No specific reasons were given other than “due to unforeseen circumstances that have arisen”. There is a compensation procedure in place for those that have made travel arrangements to the event.

This announcement is the latest in a series of cancelled and postponed events in Macau. Late last year, the Asian Poker Tour had been forced to move their finale to Manila after failing to gain the required approvals for Macau.

The 2019 APT Macau initially scheduled from March 22 to April 2 has also been removed from APT’s calendar.

How much of this has to do with a change of China’s regulations affecting Asia’s gaming mecca is not clear, but it is known that poker has never been seen as a very valuable part of business to casino owners.

Poker is generating less revenue than table games or slot machines, and the poker tables take up a lot of floor space that could be filled with more profitable games for the house. Many casinos offer poker simply to get the players through the door and hope they’ll also gamble in the pit.

Despite the recent cancellations and no mention of any events in the Macau poker calendar, PokerStars seems to be recruiting for live events in Macau.

Their venue at City of Dreams had closed its door last summer and since then players have been wondering when the PokerStars Brand will come back to Macau.

Fueling the rumor is the fact that a link to a job posting by a company from Hong Kong looking for a Cashier Manager working in Macau has been posted on 2+2. 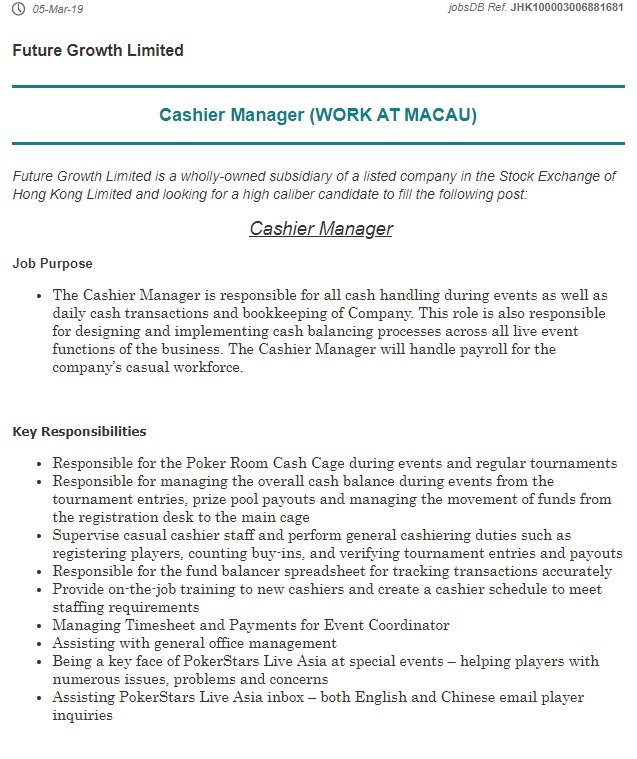 It is not an official announcement of an upcoming PokerStars event in Macau, but the job description includes:

“Being a key face of PokerStars Live Asia at special events – helping players with numerous issues, problems and concerns”

Somuchpoker will update you as soon as any official news is released.