Reports suggest the current blinds in Bobby’s Room are $4K/8K and $250K pots are changing hands. Who said summertime in Vegas was all about the WSOP? This cash game action does of course spring up partly due to the WSOP bringing players together, but many players head to Vegas at this time of year purely for the cash games.

Just like last year, Gus Hansen is treating the poker world to regular Instagram updates of his cash game exploits. His posts have provided details of the huge blinds and six-figure pots changing hands, along with letting the poker world know that he is currently winning in the games.

It’s clear that cash games remain the Dane’s focus this summer, but he has also been seen briefly at the WSOP, busting the $50K Player’s Championship early before heading back to the mixed game cash action. The line up involved is not fully known, but we know from social media activity that Daniel “jungleman12” Cates is there battling it out with Hansen.

The Aria has been making headlines for the wrong reasons in recent months, with many players venting their frustrations at what they feel are private games in all but name. Jason Mercier is the latest player to bring the issue to the public eye, posting on Twitter about a 4-handed 300/600 PLO game at the Aria. Apparently, Ben Pollak took a seat, only for a player to call the floor over, who then politely asked him to leave the table.

“Private” No one can join lol

I see ben Pollak try to play, player calls floor who comes in and tells him he can’t join. I wasn’t even really looking to play myself but probably would’ve hopped in

This is a tragedy @ARIAPoker

Jason Mercier described the situation as “a tragedy”, claiming that he may have hopped into the game himself if not for the private nature of the game. Director of Poker Operations at the Aria, Sean McCormack tweeted that these games are perfectly legal.

“Reserved gaming” is absolutely allowed in the Casino. 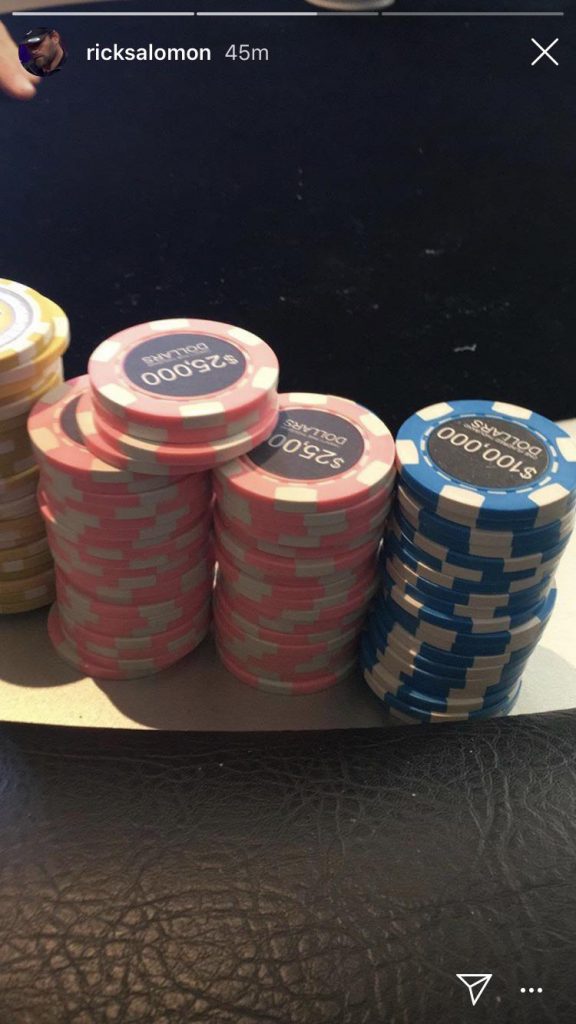 We cannot confirm whether this one is in Las Vegas or not, but in the interests of discussing current cash games, we couldn’t possibly leave it out. It’s pretty rare to see a player sitting on a seven-figure stack in a cash game, so to see one sitting on almost $3.5 million is a real eye opener.

Rick Salomon posted a picture on SnapChat of his mammoth chip stack and given the lack of casino branding on the chips; it is entirely possible that it was a home cash game. Salomon is known to frequent some of the softest nosebleed games in the world where no professionals are invited.

Despite many of these home games taking place outside of Las Vegas, Salamon is known to have been there on July 1st to celebrate ex-wife Pamela Anderson’s birthday. Given that the picture was posted within twenty-four hours of that, it’s quite likely this cash game was indeed in Las Vegas. Salamon will be taking a moment away from monster cash games at the end of this month with his attendance already confirmed for the £1 million Triton tournament in London.