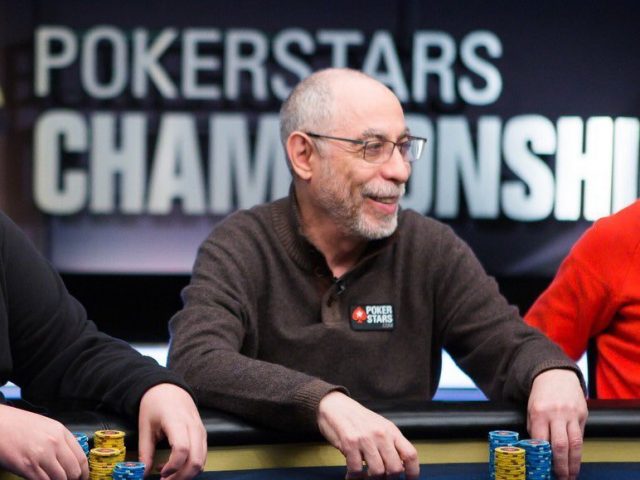 Barry Greenstein is an American professional poker player. He was born on December 30th, 1954 in Chicago, IL.

He has 3 WSOP gold bracelets and a total of $8.396 million in live tournament earnings. Greenstein also appeared routinely on both of the two most classic and beloved poker TV shows, Poker After Dark and High Stakes Poker. He was inducted into the Poker Hall of Fame in 2011.

Because of his frequent charitable donations, people affectionately nicknamed him “the Robin Hood of Poker”.

According to his website, Greenstein grew up in the Irish-Catholic neighborhood in Chicago in a family which loved card games. His father taught him poker at the age of 4.

He went on to graduate from the University of Illinois with a bachelor’s degree in computer science. He also started their PhD program that he never finished. During the course of his studies, he played poker in his local casinos to sustain himself.

Later, Greenstein started working in California for Symantec, the security software company that produced the Norton Antivirus software. By 1991, he won enough money at the poker table to pull the trigger: he quit his job at Symantec and started pursuing poker as his career full time.

Barry Greenstein’s Hendon page shows $8.396 million in career earnings. That sum is the product of 224 individual ITM finishes over the course of 28 years.

The first recorded cash on his profile is from the 1992 WSOP Main Event. However, we know from his biographical works that Greenstein was playing professionally by then. This means that there are likely to be some smaller tournament scores from California and Illinois that were untracked by Hendon.

In January 2004, he scored his biggest single tournament cash to date. He took down the $10K Main Event at the Fifth Annual Jack Binion World Poker Open in Tunica, MS for no less than $1,278,370.

Overall, Barry Greenstein has cashed in 107 World Series events for a total of $3,177,407. He had some big scores outside of bracelet winning events too.

Barry Greenstein has appeared on a number of popular shows in which he played live cash in front of the cameras.

He played on Poker After Dark, airing on NBC between 2007 and 2011. He also played on The Game Show Network’s High Stakes Poker. In these televised sessions, he played against some of the biggest names in poker history – Doyle Brunson, Phil Hellmuth, Daniel Negreanu and more.

According to an interview Greenstein gave to pokernews.com in 2015, he came to Las Vegas in around 2003-2004 at the invitation of his friend Sailor Roberts to play at Bobby’s Room. Bobby’s Room is the world’s most famous super high stakes cash game room at the Bellagio.

Lowball games, such as 2-7 Triple Draw and A-5 Lowball were just starting to take off in Vegas. However, Greenstein, who lived in California at the time, was one of the earliest adopters of this game – as we wrote above, that’s the one he won his first bracelet in.

According to Greenstein, his lowball cash game session was “a bloodbath”, clearing out such poker greats as Doyle Brunson or Chip Reese for $5 million.

Greenstein played under the screen name “barryg1” on both PokerStars and the now defunct Full Tilt Poker.

The online MTT database PocketFives shows a modest $201,000 in online tournament earnings for Greenstein. He last cash is from before Black Friday, March 2011.

"can't believe barry won the sunday billion haha pic.twitter.com/b4VEpc7dRP” that's how tournaments were before people learned how to play.

Barry Greenstein was a sponsored Team PokerStars pro until early 2019 when he decided to cut ties with the poker room giant. He claimed he did so because the deal wasn’t lucrative enough for him anymore.

In 2005, he released a poker strategy book “Ace on the River“, published by the Last Knight Publishing Company. The foreword was written by none other than Doyle Brunson.

"@aimee1112: can you pls restock @amazon pic.twitter.com/1qz0kiuDoQ" you might want to buy the ebook from http://t.co/lwTLWMMSFm

The Robbery in Paris with Phil Ivey

Greenstein told this story on Joe Ingram’s Podcast “Poker Life” in May 2019.

Greenstein and Ivey were in Paris for a WPT event. They were playing a 400/800 (whether it’s Euros or Dollars, it wasn’t specified) cash game when they started to hear frantic screaming – a gunman entered the casino.

According to the hero of our story, everybody hid under the table but him. He felt confident the robber was going for the cashier cage and not the poker table where they only had chips, not cash.

Eventually someone dragged him under the table too. While taking cover, Phil Ivey reminded him that he was “on for doubles” in the game of props they were playing. However, when the commotion subdued and the players got back to the table, it turned out it was actually Greenstein who was on for doubles – Ivey used the armed robbery as an opportunity to make an epic bluff.