Live poker in Australia is alive and recovering well as compared to the rest of the world who are still seeing the drastic effects brought about by the current global health situation. Back to back great value tournaments are lined up on schedule and targeted mainly for local players as major operators begin to resume operations in the Land Down Under. Poker action is expected to continue thriving a step ahead towards normalcy with the Australian Poker Tour and the World Poker Tour heading to Gold Coast in the next couple of weeks.

On to the latest, the Poker Palace Summer Championships festival just recently concluded with local John Bogdanovski scooping up the most impressive title of all, along with AUD 100,000 (~USD 77,030) for his victory. The WPT League, whose events are also relatively popular in the local scene, has found a new permanent location in St Johns Park Bowling Club in Gold Coast. The League’s Quarterly Poker Championship which similarly concluded last week saw the country’s largest field for a poker event. A total of 2,405 entries were recorded for its Main Event where Brisbane local Phil Stamler pocketed the AUD 50,000 (~USD 38,515) first prize and the champion title.

The last three weeks have been most eventful for both the players and hosts of the Poker Palace Summer Championships held in Sydney’s Club Marconi. The festival which ran from February 16 – March 8, 2021, was met with smashing success as the nine events on schedule surpassed the estimated AUD 800,000 in prizes to reach a total of AUD 1.38 million (~USD 1.06 million) in payouts.

“After three amazing weeks, the curtains have finally closed on our Summer Championships and what a series it has been. The unparalleled success of the MCC left us on such a high that we weren’t expecting to top; yet here we are. After doubling the estimations from $400,000 to $800,000, we are proud to announce this series paid out a whopping $1,375,440 in prizes”, posted Poker Palace Australia on its official Facebook account.

Scooping up the biggest title of the series was local player John Bogdanovski who emerged victorious after battling opponent Mark Staples in four hours of heads up play. Bogdanovski bested the field of 366 players and went home AUD 100,000 (~USD 77,030) for his win. The Main Event with a buy-in of AUD 1,150 (~USD 887) generated a prize pool of AUD 363,896 (~USD 280,805), leaving only the champion with a six-figure score. This latest triumph appears to be Bogdanovski’s biggest career cash with his total live earnings amounting to a modest USD 28,546, all of which come from nine local events according to HendonMob.

Bogdanovski’s final table experience was a smooth ride towards the coveted win having dominated the end game throughout. Cards were falling into place for the fortunate player as he found himself responsible for knocking out five out of his seven opponents. The heads up play, while Staples put up a strong fight, remained in Bogdanovski’s favor up until the end. Bogdanovski came in with a 3:1 chip advantage and fiercely never lost the lead to Staples who was left to settle for a second place finish and AUD 63,000 (~USD 48,233) in winnings. 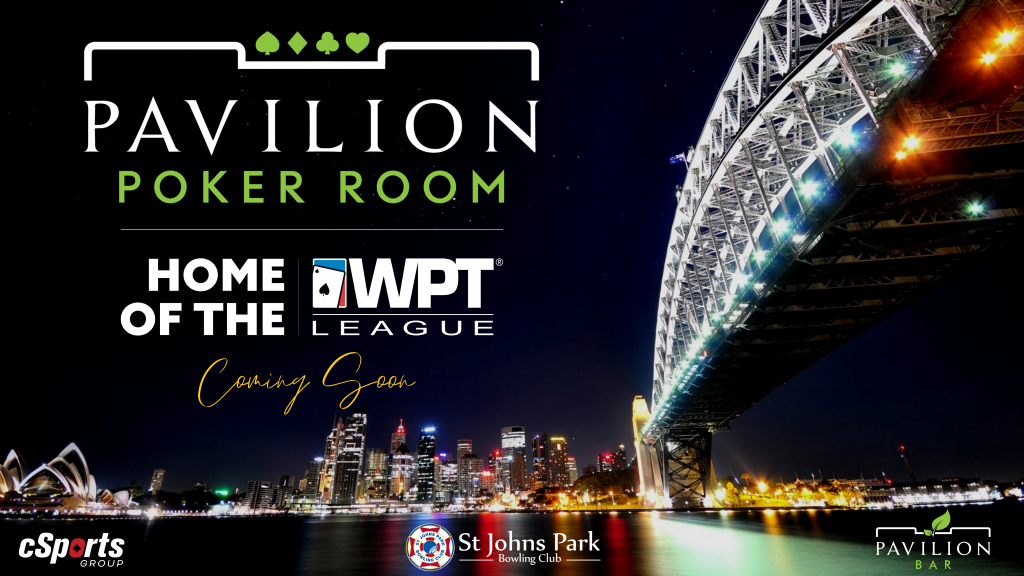 With nonstop live poker action in Australia, the World Poker Tour League has found itself a new permanent location on the lower level of St Johns Park Bowling Club in Southwest Sydney. The entertainment destination entitled Pavilion Poker Room is set to officially open on March 31st with an exciting series to celebrate the pending launch. The new venue boasts of a 150-player capacity, casino-grade gaming equipment, a membership and rewards program, and its own bar and lounge area with 15 LCD screens to cater to sport fanatics and exclusive pay per view events.

WPT League licensee for Sydney, Bruno Rao explains, “The whole concept behind the room was to create a facility for the middle market that would give them that poker room experience.”

“The whole facility [St Johns Park Bowling Club] is a $3 million complex but downstairs will now be the poker room. We are upgrading the equipment and attached facilities to casino-grade and we will run our series here and have this as the home of the WPT in Sydney.”

“We will also use the room as a gateway for WPT events internationally, whether that be Asia or the US. It will likely be a satellite format to WPT Gold Coast, WPT events in Asia like Japan and Korea, and WPT500 in the US when that comes back on board”, added Rao.

Kicking off the festival will be an “All In for Cancer” charity event with 15 more events on schedule to follow thereafter. The WPT League Annual Poker Championship (APC) will run through April 11th with buy-ins ranging from AUD 50 to AUD 1,150 for the High Roller Event. The awaited series will feature a AUD 500,000 (~USD 385,157) combined guarantee in prizes with the Main Event alone sharing AUD 200,000 (~USD 154,063) of that said guarantee. A AUD 675 (~USD 520) buy-in will furnish each player an initial stack of 50,000 in chips with blind levels running at 30 minutes each. Local players will have a chance to enter day two through four starting flights beginning on April 8 and an eventual champion to be crowned on April 11. 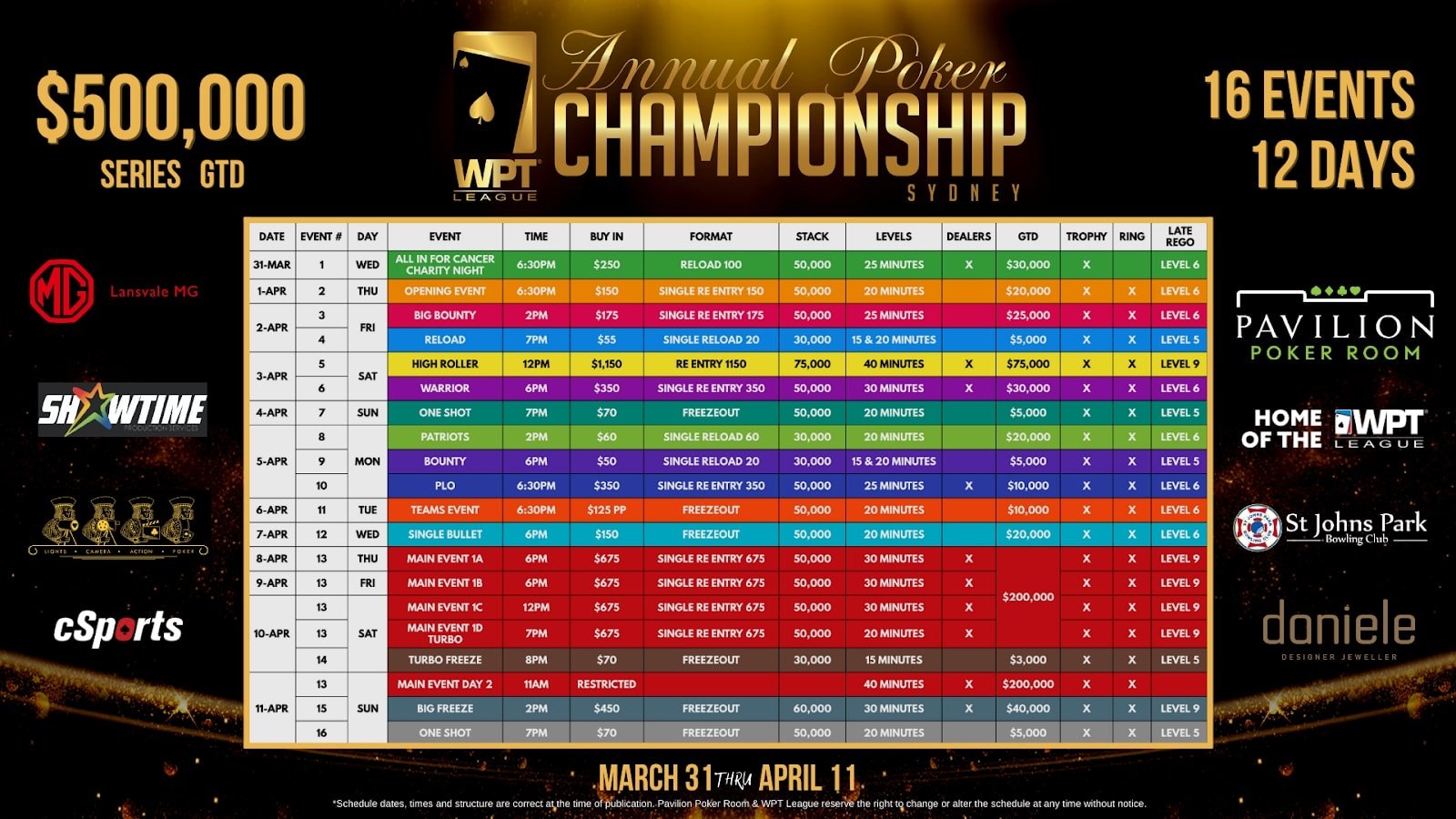 Aside from major festivals, the Pavilion Poker Room is also set to host daily and weekly events once regular operations ensue. The WPT League is widely known for its Monthly and Quarterly Poker Championships (QPC) with its latest one yet breaking the country’s record for largest field of players for a poker event. Held a few weeks ago in Gold Coast Turb Club Event Centre, the 22 event line-up garnered a whopping total of 7,455 entries and awarded over AUD 1.2 million in prizes. The Main Event alone attracted 2,405 entries as to which Brisbane local Phil Stamler claimed the AUD 50,000 (~USD 38,515) top prize and a WPT League Champions bracelet.

Mitch Caton, WPT League Head of Events Management commented on their success saying, “It’s overwhelming to see players turn out in such huge numbers to support us. We previously held the third or fourth highest event in Australia so it’s nice to claim that top spot, which will be hard to beat.”

“We’ve been getting bigger and bigger every year and after the challenges we faced in 2020, this shows that poker players are keener than ever to get out there and play.”

True enough, with no hint of live poker action in Australia slowing down anytime soon, WPT League’s move to set up shop will not only benefit the brand but will at the same time, promote a growing poker community.