Ali Imsirovic is a Bosnian professional poker player. He was born on January 29th, 1995, in Zenica, Bosnia and Herzegovina.

He regularly plays in the biggest high rollers around the world. His live tournament earnings exceed $15 million. Naturally, he leads the all time money list for his home country, Bosnia.

In 2018, he won the Purple Jacket at the Poker Masters high roller series. This is an annual high buy-in tournament series which awards the player with the best overall performance across its events every year. In 2021, he also won the very similar PokerGO Tour Player of the Year award, after winning 14 (!) events in the high roller series in one year.

Imsirovic was born in Bosnia and Herzegovina. However, his family had to flee their home country due to the Balkan war in the 1990’s. They resettled in the United States.

The young Ali was really into basketball. However, when his ankle issues prevented him from pursuing a career in his favorite sport around the age of 16, he found his new passion – poker.

He first asked his father to join his home game, but he didn’t let him, opposing gambling for his minor son. So, Imsirovic decided to start playing online – at the worst possible time in the US, right before the Black Friday events. Thanks to his great academic performance, Imsirovic was able to attend college at the same time, also at age 16. He kept grinding freeroll and low stakes tournaments online on the side.

When he finally turned 18, the legal gambling age in Washington state where he lived, he started playing live tournaments. He saw a lot of success from the get-go. He actually won the very first live tournament he played in, a $60 NLHE tourney in Portland, Oregon.

Imsirovic has $15.051 million live tournament cashes, according to his Hendon page. That sum is the product of ITM finishes in 128 different live events over the course of 6 years. He currently leads the Bosnian all time money list on Hendon by a wide margin.

He mentioned that he won his first live poker tournament ever, a $60 tourney in Portland back in 2013, in an interview with Cardplayer Media on the Poker Stories Podcast. However, that result isn’t recorded. Instead, the first recorded cash on his profile is from November 2015. He came in 46th in the $1,650 Main Event at the Caribbean Poker Tour in the Dominican Republic for $3,630.

He then racked up a couple of cashes in mid-stakes tourneys across the US in 2016. In 2017, he ventured into Europe, taking home cashes from Rozvadov, Czech Republic and Seefeld, Austria.

The first time he made a live score for over $100K was in January 2018. He took down the $10,150 No Limit hold’em event at the PokerStars Caribbean Adventure in the Bahamas for $160,050. He beat accomplished American poker pro Ryan Riess heads-up for the title.

In September 2019, he came in 2nd in the £252,500 buy-in Super High Roller Bowl London for £900,000. That is his biggest single live tournament score to date. He lost the heads-up battle for the title to PokerGO founder and millionaire recreational player Cary Katz.

Earlier that year, in February 2019, he won his first WSOP Circuit Ring. He finished first in the $2,200 No Limit Hold’em High Roller event for $96,659 at the Las Vegas stop of the WSOPC, at the iconic Rio All-Suite Hotel & Casino. In 2021, he captured his second ring.

In June 2021, Imsirovic went on a hot run in the US Poker Open, held at the Aria Casino in Las Vegas. He cashed in 5 of the total 10 events.

He carried his great form over to the PokerGO Tour, which was played all throughout 2021. He managed to take down an astonishing 14 (!) of their events. His biggest scores from the series were winning a $25,500 No Limit Hold’em event for $695,355 in November; and winning the $50,000 Super High Roller Bowl Europe event in Cyprus for $598,000 in September.

Needless to say, his stellar performance earned him the inaugural PokerGO Tour Player of the Year award in 2021.

Ali Imsirovic is yet to win his first WSOP gold bracelet.

When it comes to live poker, Imsirovic has always focused on tournaments, rather than cash games. He hasn’t appeared on any TV shows or online live streams where he played cash games publicly.

He did appear on PokerGO’s revived version of Poker After Dark, twice. However, in those episodes, the players played Sit&Go’s instead of cash games.

As we wrote above, Ismirovic started his poker journey by playing freerolls and low stakes tournaments on an undisclosed poker site underaged, at just 16.

He now plays under the screen names “ali23imsirovic” on Americas Cardroom, “allinali23” on WSOP.com, and under his full name “Ali Imsirovic” on Natural8-GGNetwork. While his career online MTT earnings aren’t tracked overall, some of his online results have been recorded by numerous poker sites.

Imsirovic made headlines on the poker news sites in August 2020 for breaking the record of the biggest No Limit Hold’em cash game pot ever played. He took $974,631 from Tan “tan4321” Xuan at a $500/$1,000 NLHE table on Natural8-GGNetwork after hitting a flush with AK of Spades on the river against his opponent’s two pair, 9’s and 5’s. 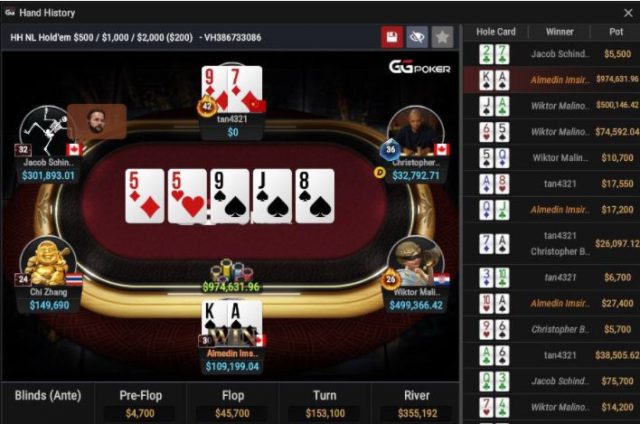 Please note, however, that this isn’t the biggest cash game pot in online poker history as a whole, only in a game of No Limit Texas Hold’em. The overall record still belongs to a $500/$1,000 Pot Limit Omaha hand played between Patrik Antonius and Viktor “Isildur1’ Blom in November 2009. Antonius won that pot of no less than $1.357 million.