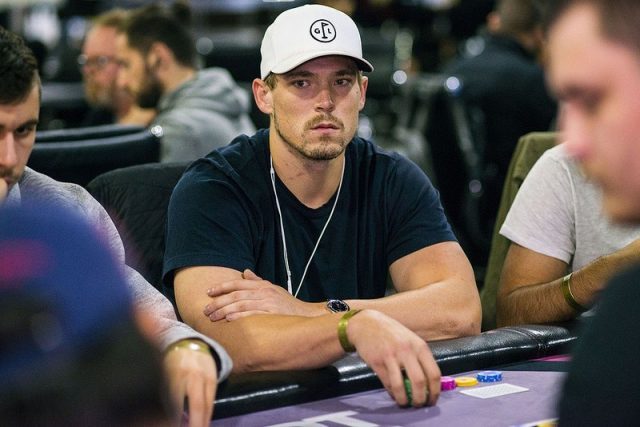 Alex Foxen is an American professional poker player. He was born on February 1st, 1991 in Cold Spring Harbor, NY. Formerly, he played football as a tight end for the Boston College Eagles.

He has over $15.2 million in live tournament earnings. He won the GPI Player of the Year award in 2018 and is writing history by becoming the first ever back-to-back GPI POY in 2019 after winning the WPT Five Diamond Classics late in December to soar past his competition on the leaderboard.

Foxen attended Boston College. He also played tight end for their football team. He graduated in 2014 at the age of 23.

He told this to our website in a 2019 interview about the early stages of his poker career.

“I got into poker when I was really young, like a lot of people, but I didn’t start playing seriously until I was 23 years old, after I graduated from university. I played online for a couple of years, and I made the transition to live poker in 2016. I worked my way up from there, starting with small tournaments like $200 to $500. I progressed whenever I could and played bigger whenever I could, and I’m continuing to do that now!”

When he started in poker, he was playing MTT’s on PokerStars under the screen name “bigfox86”.

He also talked about how his background in American football shaped his perspective on the game of poker, saying:

“I have a history in sports, so sometimes I would have some emotional responses to losing, sometimes versus a certain type of player, something like that. So, for me, especially early on, the biggest thing I had to work on was my mental game, my emotional responses to things. Because when you play a sport, for example, you can get really mad and play really hard, but in poker, if you play really hard, it’s not going to help you; you’ll just end up losing your chips.”

Foxen’s Hendon profile shows $15.2 million in career earnings. It’s a sum of 142 individual cashes over the course of 7 years.

Even though he stated in the quote above that he made the transition to live poker in 2016, his first recorded live cash actually comes from May 2012. He won a $355 WSOP Circuit event for $22,421 in New Orleans.

It is true though that he started getting his major scores after 2016. The first time he made a 6-figure cash, for example, was in August 2017 when he won a $2,650 No Limit Hold’em tournament at the Seminole Hard Rock Poker Open for no less than $204,600.

It really was a dream come true to get the chance to play on this stage. Despite coming up short of the win I couldn’t be more thankful for the experience and everyone’s support. Took a few days for it to sink in, but now it’s time to get back to work. #WPT5D

Foxen’s biggest tournament score comes from the 2018 $300K Aria Super High Roller Bowl. He got to the heads-up match against Isaac Haxton for the title and eventually was defeated. His second place finish still got him a $2,160,000 payday.

His overall 2018 results earned him the Global Poker Index’ Player of the Year award. Please note, however, that it is somewhat of an odd outcome given the fact that that year Justin Bonomo won over $25 million in live tournaments – more than anyone in a given year ever before. Yet Bonomo finished 4th on their list.

In 2019 Foxen wrote history by zooming past his competition on the GPI POY leaderboard in December to become the first ever back-to-back GPI Player of the Year.

He cashed in the WSOP for the first time in 2015, in the $1,500 Split Format No Limit Hold’em event. “Split format” means the tourney is alternating between 9-handed, 6-handed and heads-up poker on different days. It’s an unusual structure that is rarely on the schedule. Foxen finished 85th in that event for $2,445.

In 2019, he made a very deep run in the Main Event. In the second largest ME field in WSOP history – 8,569 players – he managed to come in 40th place. He won $211,945 for that achievement, which is his biggest tournament cash from the WSOP to date.

In March 2019, Foxen appeared on a Live at the Bike’s “Million Dollar Cash Game” stream. The stakes were $100/$200/$400, the minimum buy-in was $100,000, while the game was No Limit Texas Hold’em. Foxen was playing against poker loving billionaire Bill Perkins, American poker pro Matt Berkey and defending Main Event champion at the time John Cynn among others.

As we mentioned in our intro, Foxen started his poker career as an online MTT player.

He was mainly playing on PokerStars under the screen name “bigfox86” where he racked up $1.76 million in cashes. He also played on PS’s French server, pokerstars.fr. There, he used the moniker “fktheseguysbro” and has an additional $1.3 million in MTT cashes on his tally.

Overall, across all the poker rooms he played on, he has $4.145 million in career earnings, according to the online MTT database PocketFives.

The biggest online MTT score on his tally is a $245,770 cash. He earned that by winning a $3,221 buy-in POWERFEST Championship Event on partypoker.

Softplaying Allegations and the Fallout with Doug Polk

In June 2018, Alex Foxen and his girlfriend, Kristen Bicknell both entered a $5,000 tournament in The Venetian. Foxen ended winning the event while Bicknell took 2nd place.

In the wake of the result, the online poker community started accusing the couple of softpalying against each other. Most notably, Doug Polk made a video on his YouTube channel about the incident.

A year later, Polk was the guest on Joe Ingram’s Poker Life podcast. Near the end of the episode, he told the story of how Foxen reacted to the video critical of him.

According to Polk, Foxen texted him telling him to take the video down. He also insinuated in his message that Polk doesn’t understand tournament strategy and that’s why he suspected softplay. Evidently, Polk was quite annoyed with Foxen’s tone and didn’t comply with his imperative.