The WPT National China has always been a showpiece event, partly because international live poker tournaments in China are a rarity. But now, since Ourgame have taken over the WPT and are using their ties to social gaming to help augment this event, it has become even more special. This event has been held in MGM Grand Sanya three times up to now, and the venue is becoming increasingly popular, as reflected by the turnout of 882 players this year.

After 4 days of action, we finally got to see how the final table would shape up. Weijie Huang is not a name that most poker followers will have heard of, but his accomplishments in this event were admirable, having fought his way to the final table with a commanding chip lead of 5,345,000. His nearest challenger was Chengxing Wang with 3,300,000 although he was followed by a chasing pack rather than a chasing player. Yu Liu brought 3,255,000 to the table, and Wenlong Jin began the day with 3,230,000. Slightly further back, but still in with a chance were Shu Sun with 1,735,000 and Xin Jin with 695,000.

It took 7 hours of play to finally bring WPT Sanya to it's conclusion, and despite his healthy chip lead, it was not Weijie Huang who lifted the title. Our 5th shortest stack going into today, Shu Sun managed to grind his stack up, earn himself a shot at winning this prestigious event, and did exactly that, picking up USD$242,911 for his efforts. He also took home an Aurae Gold Mastercard with USD$10,000 on it, in addition to his prize. 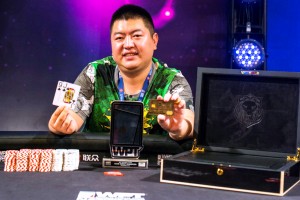 Shu Sun had come to Sanya for a holiday with his friends and family when he decided to play the event. That has proved to be a lucrative decision for him.

The total field generated a prize pool which amounted to USD$1.39 million, and each of the 108 players who cashed, took home a minimum of USD$2,633. With a great showing of players creating an excellent prize pool, and the entertainment provided by Ourgame before the event, there are many reasons why WPT Sanya in season 4 can be considered a great success.

This tournament showed everything that can be possible in the future, if live poker tournaments become a more regular feature in China. The Asian poker world now looks forward to the exciting prospect of WPT National Korea, scheduled for December 14th.