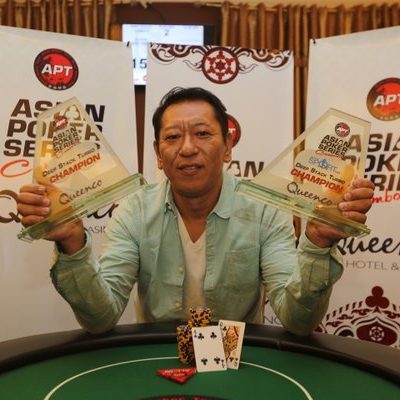 Tetsuya Tsuchikawa has been a constant presence on the Asian tour, and at about 50 years of age, is a little older than most of the up and coming players from his home country of Japan.

Having taken up poker during its early stages in Asia, Tsuchikawa has become one of the more successful, and recognisable faces in Asian poker, not only as a player but he is also considered as one of the key movers of the game in Japan.

Tsuchikawa‘s first live cash came in 2010, but it wasn’t until 2011 that he took home a significant amount of prize money. The Red Dragon event at the Macau Poker Cup was an event that most players would like to win, and Tsuchikawa came very close, finishing 2nd for USD$91,868. September 2012 saw him once again come painfully close to victory, when he finished 2nd in the Asian Poker Tour (APT) Manila Main Event for USD$48,043. Finally, in October 2014, came the greatest moment in Tsuchikawa’s career. He took his long awaited 1st place, in the World Poker Tour (WPT) Philippines Main Event, for almost USD$154,000 and then followed it up with 2nd at the APT Manila Main Event, banking another USD$40,710 in the process. In December 2015, he added one more trophy to his personal collection with a victory in the  Pokerstars Manila Megastack 4 for $15,975.

The year 2016 has also proven to be very productive for Tsuchikawa.  Despite not really having a major win for the year, Tsuchikawa has been consistently “in the money”.

In June, he took down 2 events at the APT Macau – No Limit Ante Up for Charity Event and No Limit Holdem (NLH) 6-Handed Turbo with Antes Event for USD$1,218 and USD$2,679, respectively. Because of these 2 victories, Tsuchikawa was named the APT Player of the Series.

The following month, Tsuchikawa once again shone bright during the APT 2017 Southeast Asia in Poipet, Cambodia,  He took down the Welcome Event for US$1,800 and the 6-Handed Turbo for US$1,830.

Whilst Tsuchikawa remains prolific when it comes to Asian tournament circuits like the APT, WPT  and PokerStars events, he still dreams of a big result at the World Series of Poker (WSOP). He has 7 cashes at the WSOP, but no final tables yet.

Read more about this player on Somuchpoker