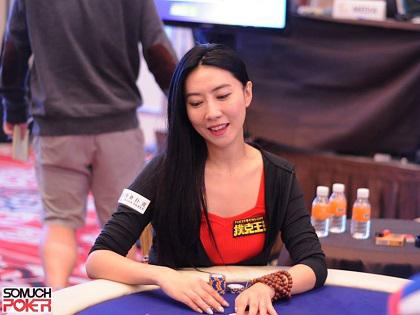 Sixiao Juicy Li, member of Poker King Club Team Pro, is rightfully named China’s First Lady of Poker as she has been one of the few female poker players that has been consistently cashing in tournaments in the Asian Poker scene.

A former actress, Li has been playing poker since 2010 but only started finishing in the money in 2011.

Her first money finish was at the Macau Poker Cup (MPC) Red Dragon Event in February 2011 where she took home a small cash token of US$2,287 for her efforts.  For the rest of that year, she had regularly finished in a cash position.

The following year wasn’t as fruitful for Li as far as performance was concerned but in 2013, she was back in form earning her first significant cash prize of US$33,865 for placing 5th in the Asian Pacific Poker Tour (APPT) Seoul Main Event.

The rest of 2013 and all  through 2014, Li was not able to bag any major victory but was still able to show her skill and prowess in the game of poker by frequently being In-the-Money list.  She even tried her luck in the World Series of Poker (WSOP) 2014 No Limit Hold’em Event and was able to prove her competence as a poker player by taking a home some monetary reward for making it to the top 123 of the event.

In 2015, Li started asserting herself as a force to be reckoned with by being one step short of taking home the trophy.  In November 2015, she placed 2nd in the Asia Championship of Poker (ACOP) Ladies Event and took home US$9,325.  But more prominent was her 2nd place finish at the Tencent Poker Tour Main Event in Sanya at the end of 2015 where she brought home US$77, 115.

The year 2016 saw  Li finishing at the top 10 places of events with an 11th place finish at the APPT Macau Main Event where she won US$21, 254 as her top accomplishment for the year.

As a poker player, Juicy Li is getting stronger as the years go by.  She definitely has the beauty and the brains to amaze the poker community further in the years to come.