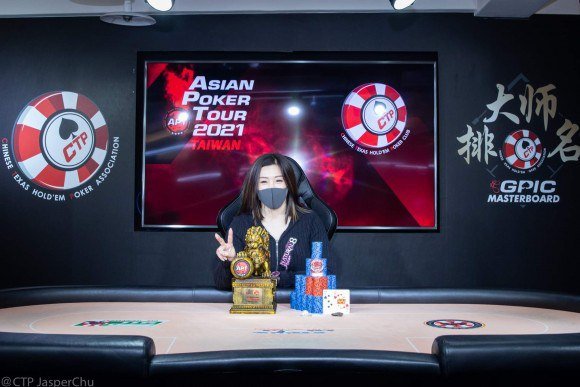 Hui Chen ‘Kitty’ Kuo from Taiwan is one of the best known female poker players in Asia. She is a brand ambassador of the largest Asian online poker room, Natural8-GGNetwork.

Kuo has been playing tournaments since 2007 and has been making small earnings for her efforts. But in 2007, she caught the attention of the poker community when she landed 1st place at the PokerStars Macau Poker Cup (MPC) Main Event grabbing for herself a trophy and a cash prize worth USD$71,899.

After that year, Kuo kept making it in the money consistently with relatively small earnings. But all those years of honing her skills finally paid off in 2012. In the first quarter of the year, she finished 3rd at the Asian Pacific Poker Tour (APPT) Seoul for USD$15,778. In September of that same year, she made USD$25,143 at the Partouche Poker Tour Main Event and immediately followed that up with a 4th place finish at the World Poker Tour (WPT) Malta Main Event for USD$50,649. And as 3 is a charm, Kuo ended the month of September by going deep into the World Series of Poker (WSOP) Europe Main Event and earning €22,982 (USD$29,983).

Kuo continued her streak in 2013 by starting the year with earning USD$58,063 at the Aussie Millions Poker Championship Main Event. And throughout the year 2013, she continued making it in the money regularly in tournaments all over the world – in Asia, Europe and the United States.

But it was in 2014 that she made her first 6-figure score in a live tournament. Kuo placed 3rd in the Hollywood Poker Open Main Event in Las Vegas, taking home USD$142,158. Continuing to make a name for herself and with numerous cashes in between 2014 and 2016, her next 6-figure payday happened in Melbourne at the Main Event of the 2016 Aussie Millions. Definitely a prominent poker figure at this point, 6-figure cash prizes were becoming a regularity in Kuo’s performance. In August 2016, she made it to the final table of the European Poker Tour (EPT) No Limit Holdem Event and ended at 6th place for USD$114,072.

Her biggest live tournament cash to date is also from that year. In May 2018, she finished 2nd in the $10K WPT Bobby Baldwin Classic NLHE event at the WPT Tournament of Champions at the Aria in Las Vegas. She lost the heads-up battle to the title to the American pro Darren Elias, but she still pocketed no less than $248,380.

In an interview, Kuo once said that she wants to become a better poker player than her husband Russel Thomas. With this kind of solid performance throughout her career, and $2.350 million in live tournament cashes, there is no doubt that her desire will become a reality.