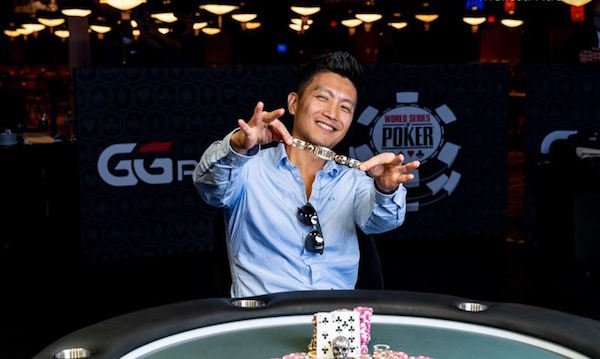 He has $1.519 million in live tournament cashes. Despite that, he describes himself as a “hobby player”.

He even said so after he won his first WSOP gold bracelet. He took down the $2,500 No Limit Hold’em Freezeout event for $364,589 in 2021. Online, he plays under the screen name “cyphellus” on PokerStars and Natural8-GGNetwork, where he collected a little over $200K in MTT cashes.

However, his greatest poker achievement to date by far came in October 2021.

That year, Carlos Chang won the $2,500 WSOP No Limit Hold’em Freezeout event. This earned his first ever gold bracelet along with the $364,589 first prize, which is his biggest single live tournament score to date. He beat Brady Osterman from the United States heads-up for the title.

As for online poker, Chang plays under the screen name “cyphellus” on PokerStars and Natural8-GGNetwork. He actually started playing online tournaments before live ones, as his first recorded online MTT cash on his PocketFives profile is from December 2007. He collected $206,000 in online tournaments across all sites over his career.

His biggest tourney score to date on the internet is $58,560. He earned that sum for finishing 3rd out of a field of 3,203 entries in the High Roller Club: $530 Bounty Builder HR [Progressive KO] event on PokerStars in March 2020.