As poker gains in popularity around the world, players are starting to enjoy a broader diversity in the styles of poker available to them. Thus, Chinese poker, also known as Pusoy, has been gaining in popularity. Although this exciting and animated game has been known in the Asian community for years, it has recently widened its reach.

Relatively easy to pick up, especially if you already know how to play poker, Chinese poker is a fast-paced game that most players find to be very fun. Even players who are entirely new to any kind of poker can learn Chinese poker fairly quickly, and many will enjoy it because it is more of a game of chance than traditional poker; thus, newcomers often have a better chance of winning. Many players also enjoy it because their losses may be as much the fault of a bad hand as bad skills. Nevertheless, Chinese poker, like other forms of poker, requires significant concentration and strategic thinking.

The Origins of Chinese Poker

While little is known about the origins of Chinese poker, certain suppositions have been made based on its relationship to other games. For instance, Chinese poker shares many similarities with another game, Pai Gow, which people having been playing for almost a thousand years.

It is possible that Chinese poker developed around the same time as Pai Gow, and, like Pai Gow remained in China for many hundreds of years before it emigrated (with Chinese immigrants) to other parts of the world. Some argue, for example, that Chinese laborers brought Pai Gow to the US during the 19th century, where it merged with forms of poker, such as Draw And Stud, that were popular in the US, and this merging created Chinese poker. However, others suggest that Chinese poker was created hundreds of years earlier in China as a game that offered more opportunities for high-stakes gambling than Pai Gow. Ultimately, though, the origins of Chinese poker may be lost to history.

The game made its first successful professional appearance in the West in 1995, when it was added to the World Series of Poker event schedule. Although it only lasted on the WSOP schedule for two years, that was enough time for it to gain a small but loyal following of players who enjoyed the extra excitement and added elements of chance. One particular story from that period involves poker professional Barry Greenstein losing $1.5M to Ted Forrest, which shows just how much the pros were willing to throw into the game. While it failed to take the world entirely by storm, Chinese poker has proven its staying power with high rollers who enjoy some diversity in their play.

Unlike what it’s name would suggest, OFC (or, open-face Chinese) did not originate in China; however, it has recently become much more popular than traditional Chinese poker. Invented in Finland in the mid-2000s, this recent poker variation was popularized in Russia by Alex Kravchenko. From there, it traveled to the United States and then Asia.

Although it has become quite popular, many traditional poker players have criticized it. For instance, according to Todd Brunson, “Open-face Chinese is a cancer in poker. It does not fall under the definition of poker…. They do not let you play Gin in the poker room for the same reason they shouldn’t let you play Chinese Poker.” Additionally, while Shaun Deeb admitted that OFC is “here to stay,” he also declared that it’s really just “great for fish”. These naysayers aside, though, OFC has gained the attention of many big-name poker professionals, including Barry Greenstein, Tom Dwan, Viktor Bloom, and Gus Hansen, all of whom have played high-stakes OFC games in Macau. Hansen even created a popular “How to Play OFC” video for FullTilt Poker’s YouTube channel. Since it hit the scene in 2013, online poker venues have offered an increasing number of OFC games on their sites.

Similarities to other forms of poker: Each OFC player takes turns drawing cards from a single deck with the goal of creating the best possible hand in relation to their competitors.

Differences: No bets are placed during the rounds of play. Instead, points are used to score the game.

Each of the three hands is compared and scored as a regular poker hand, and players win or lost points depending on how their hands measure up to their competitors. While the middle and bottom hands are standard five-card hands, the top hand only contains three cards. Because of this, the best possible configuration for the top hand is three-of-a-kind. Due to the scoring, the bottom hand must always be the best, followed by the middle, and then the top. Any other combination will lead to a bust.

Typically played between two-to-three people, OFC can be played with up to four players. Over the course of the draw rounds, each player must use 13 cards to build three hands: a bottom hand of 5 cards, a middle hand of 5 cards, and a top hand of 3 cards. Play takes place in clockwise order, beginning with the player to the left of the dealer. Just as with standard Chinese poker, the bottom hand must be stronger or equal to the middle hand, while the middle hand must be stronger or equal to the front hand. Poker hand rankings determine the strength of each hand, with the bottom and middle requiring the best 5-card hand and the top requiring the best 3-card hand. The best possible top hand is AAA. Since the top hand only includes 3 cards, straights, flushes, and straight flushes are all impossible for the top hand.

Played by a maximum of 3 people, POFC is the most popular variety of OFC right now. At the beginning of play, each player is dealt 5 cards. After that, players are dealt 3 cards at a time (as opposed to 1 at a time). They set 2 and discard 1 until each player has made 3 hands with a total of 13 cards.

POFC’s “Fantasyland” rule, for which it is famous, comes into play if a player places at least a pair of Queens on top. Having done that, the Fantasyland player will receive a total of 14 cards on the next round, and the player can keep these hidden from opponents. In order to remain in Fantasyland, the player must have a three-of-a-kind in the top hand, a full house in the middle hand, and/or a four-of-a-kind or better in the bottom hand.

This variation uses two decks of cards that are shuffled together, which allows for more people to play. Double deck Pineapple OFC is also possible. Besides the additional deck, the games are played in the same way as the single-deck varieties; however, more variable hands are possible since there are two decks. For instance, it is possible to get 5-of-a-kind, which some have suggested should be treated the same as a straight flush.

This version begins with each player being dealt 5 cards, which is just the same as normal OFC. But, then, each player receives 4 cards during each subsequent round, of which there are only 3 (5+4+4). Beyond that, the rules remain the same as regular OFC. 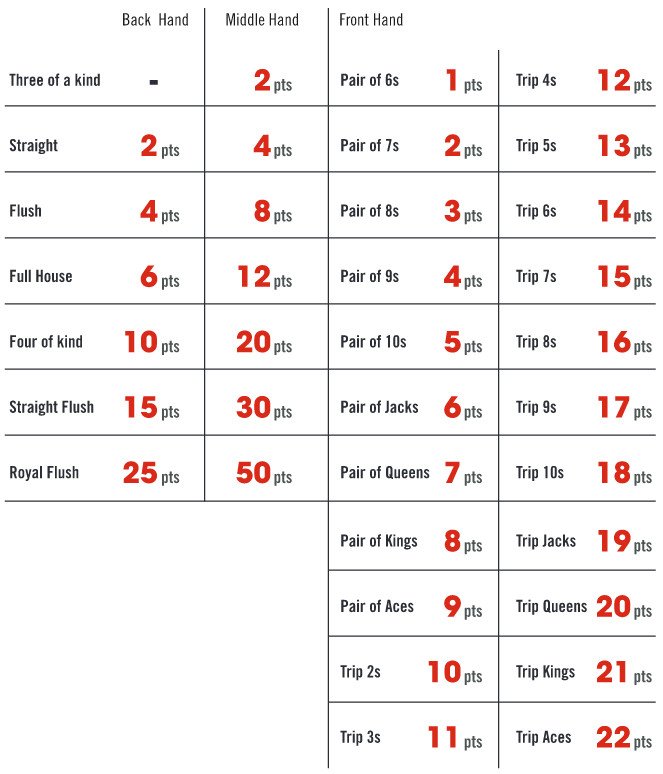 Typically, you can find OFC poker being played as a side game in larger poker tournaments, but the stakes can still get quite high. Some high-stakes games have played for anywhere from $500 to $5,000 per point. Several casinos in Las Vegas, including the Venetian, Bellagio, and Wynn casinos, offer OFC games at their poker tables.

As it has increased in popularity, OFC games can be found in an increasing number of tournaments. One famous game in 2012 took 34 hours and included such poker dignitaries as Daniel Negreanu, Scott Seiver, and Jason Mercier.

APT introduced a Pineapple OFC event at a major poker tournament in Asia in September 2014, and they continue to offer OFC side events at most of their tournaments.

At the first ever OFC World Championship, hosted by TonyBet in December 2014, Jennifer Shahade dominated the High Roller tournament, and Mikal Blomlie won the Main Event.

In another marathon OFC event at PartyPoker’s 2018 Live Million’s Germany, Gus Hansen, among others, played for 24+ hours.

Although OFC has grown in popularity, only a few sites allow players to give it a try. If you’re interested, consider checking out one of the following: