Today, the hopes of live tournament poker growing in mainland China were crushed amid a shock police raid on the Nanjing Millions. The event was before the shut down a huge success : a total of  2300 players took part to the 4 starting days.

All details which are available at this point, have been reported by World Gaming Magazine. on their facebook page.  Late this afternoon, Chinese police forces burst into the tournament venue, Wutaishan Sports Centre, where the event has been taking place over the past few days, and blocked the front entrance off. Signs were put up which quickly brought some clarity to the confusion, they read “Due to the APPT Nanjing Millions tournament being suspected of illegal gambling, the police are now investigating and the event is being ceased. All related staff should go and register at the designated location and co-operate with the police for the investigation.”

This event, much like the Beijing Millions in 2014, was co sponsored by Pokerstars, and with backing from such a large international brand name alongside a very professionally run APPT, you would expect all relevant legal checks to be in place. The problem however, is in legal grey areas relating to gambling which can be different depending on which Chinese province is hosting the event. The APPT Nanjing event was licensed by 'Jiangsu Provincial Chess Sports Association' but this apparently provided no protection against police views on the matter. Gambling is illegal in China, but as ever with poker, were should the lines between mind sport and gambling be drawn? 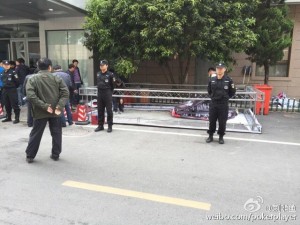 The APPT Nanjing Millions has been dramatically shut down

Is the future of live tournmanents in Mainland China compromised?

The history of live poker tournaments on the Chinese mainland has been short, but successful up to this point. The first tournment in Hainan province attracted 542 runners in 2012, but the Beijing Millions in 2014 was the real breakthrough moment, with 2,732 people turning up to play, creating a prize pool of almost USD$1.2 million. This field size had never been seen before in a live tournament outside of the United States. This latest surprising twist in the story of live tournaments in mainland China further underlines the fact that gambling is still illegal in China, and this can be heavily enforced in certain places where there is any sort of financial prize offered. Poker clubs in Beijing are restricted to offering points as prizes, and allowing those to be exchanged for goods.

As recently as February, the president of China, Xi Jinping spoke very negatively towards gambling and the companies which offer gambling to Chinese citizens, so perhaps the events of today are not quite as surprising as they initially seem.  Perhaps Chinese officials intentionally targeted a Pokerstars sponsored tournament in order to send out this message.

One thing is certain though, this police raid casts a long shadow over the hopes of poker flourishing in China, and it is difficult to see how event organisers will take the risk to schedule future live tournaments in the current climate.