For the past three days, it was a full house at the poker room of Resorts World Manila with players geared up for the APT Asian Poker Series Manila 2015 Main Event. The starting days saw day 1a with 107 entries, day 1b with 92 more, and day 1c seeing a large turnout of 142 entries, bringing the total tally to 341 entries. With an entry fee of PHP50K each, a hefty prize pool of PHP15,215,400 was generated with the eventual winner claiming a big chunk totalling PHP3,758,200.

Returning for another day at the main event battlefield will be 181 survivors with Canadian player, Linh Tran, as the overall chip leader with 111,300 chips. Tran is no stranger to the APT main event field. Since 2010, Tran has gone deep in eight of these main events with his latest stint in August at APT Cebu where he placed 16th. In this series, Tran was the chip leader in day 1b, crossing the six-digit chip mark with his pocket aces that scooped up all of Korean player Seung-Soo Jeon’s chips. Running a very close second in chips with 109,100 is Korea’s Sim Jae Kyung aka Simba. Simba also amassed his stack in day 1b. 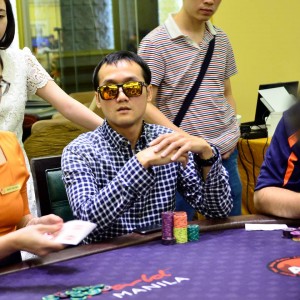 Landing the third top spot in the chip ladder is Filipino player, Noel Araniel. Araniel ended day 1a as the leader with 106,900 chips. According to reports, Araniel was very hot-handed at the felt, granted as many as six pocket aces and three pocket kings, and getting some good pay out of them. He also landed big hands, one of which was a pair of tens that filled up bringing him to where he is coming into the next round. Joining Tran, Simba, and Araniel in the six-digit mark is Filipino player Jojo Allado with 103,050 chips.

One other player to give light to is day 1c’s chip leader, Singapore’s Yah Loon who ended the day with 89,850 chips. Although he falls within the top ten of the chip rank, Loon will certainly be a very tough contender as he was seen dominating and controlling his table for most of the day.

Among those who will be joining these players for day 2 of the main event are some previous APT main event champions, Henrik Tollefsen (Norway), Feng Zhao (Singapore), John Tech (Philippines), Gerard Bringley (Japan) and Mike Takayama (Philippines). Other poker pros who will also be fighting for every chip on the felt is Singapore’s Bryan Huang, Kosei Ichinose (Japan), Kai Paulsen (Norway), Lester Edoc (Philippines), SJ Kim (Korea), and Iori Yogo (Japan). Yogo is currently second in the APT Player of the Year leader board and is looking to overtake triple crown APT POY champion Samad Razavi (UK) for the top position. Sam Razavi didn't qualify into Day 2 of the Main Event.

Day 2 should be very exciting as many short stacks, such as Slovenia’s Casey Kastle, Japan’s Tesuya Tsuchikawa, India’s Srinivas Polishetty, and local player JayR Villanueva are in the field all looking to beef up their stacks early and be in fighting contention to reach profit at 36 players.

In addition to the main event day one results, there were several side events that concluded with APT trophies awarded for each one. Japan’s Azusa Maeda has claimed not one, but two of these trophies after winning the No Limit Hold ‘em Multi Re-Buy + 1 Add-On event and the Open Face Chinese Pineapple Shootout event. With his consistent cashing at the APT festivals, Maeda will surely be another player to contend with having qualified into day 2 of the main event. 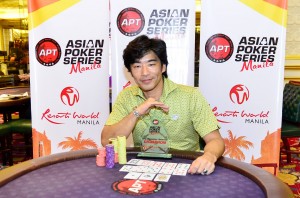 In the Ladies event, Filipino player Ferlyn Cabaling once again reigned victorious and now has five APT Ladies event titles under her belt. At the High Rollers event, Norway’s Markus Garberg defeated Florencio Campomanes in the heads up round to earn his first-ever title at the APT along with the biggest payout of the series so far, PHP1,528,000. This Norwegian is certainly one to keep a close eye on as he also qualified into day 2 of the main event. Lastly John Tech took down the Head Hunter event for a great warm-up for his run at a possible second main event title.

Stay tuned as we will be updating you with more of the APT Asian Series Manila 2015 Main Event and results of some of the ongoing side events.