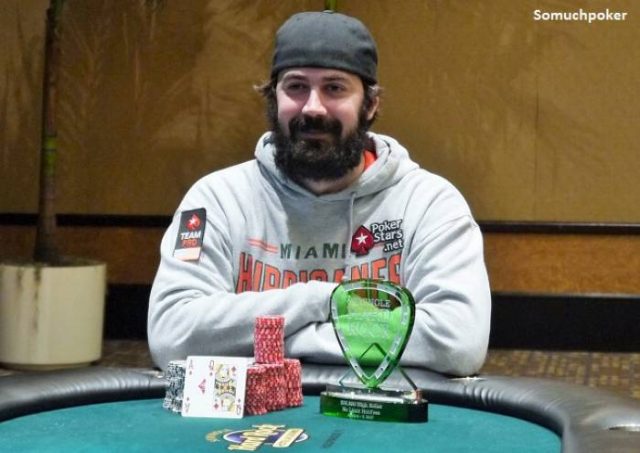 Jason Mercier is an American professional poker player. He was born on November 12th, 1986 in Hollywood, FL.

He has five WSOP gold bracelets and one WSOP Player of the Year award. He’s also won a European Poker Tour title, and has a vast number of victories in various high rollers under his belt. Mercier regularly appeared on CBS Sports’ poker show Poker Night in America.

He’s married to Natasha Mercier who also plays high buy-in poker tournaments. She often voices her support to her husband whenever he gets into online feuds.

Mercier, an avid sports fan as a teenager, was studying at the Florida Atlantic University to become a math teacher. That is until he found poker.

According to an interview he gave to pokerlisting.com, he was a winning player from the very start.

“I started in 2004, just after I turned 18. I was basically winning from the beginning, but of course I played only very small stakes. I slowly moved up to middle and then high stakes, but I always kept building my bankroll” – reminisced Mercier about his early days at the virtual felt.

After just a year in college, he dropped out to pursue playing cards for a living. While he wasn’t making enough to sustain himself, he even worked in a grocery store. Evidently, Mercier eventually managed to make enough money at the tables to go professional.

Jason Mercier exploded into the live tournament scene with his victory at the 2008 Sanremo EPT Main Event. The buy-in was €5,000 for the tournament but Mercier got in through a satellite. He eventually beat the field and won €869,000. Before that, he didn’t even have any live tournament scores on his Hendon page.

Evidently, that changed. Now he has over $19.6 million in live tournament earnings with 166 individual cashes.

His biggest live tournament score to date comes from June 2014. He came in 2nd in a $100,000 Super High Roller held at the Bellagio. He lost the heads-up battle for the title to Dan Smith, and had to be contented with “just” the $1.622 million second place prize money.

In 2016, he won the World Series’ Player of the Year award. That year, he won two bracelets, finished 2nd place once and made another final table at the WSOP.

The 32-year-old American poker pro is a regular feature on Poker Night in America’s shows. He appeared in 7 episodes so far in two different seasons.

Whenever he plays on that show, the commentators like to point out how much money he tends to win in those cash games. PNIA cash games are usually $25/$50 NLHE.

Mercier also made appearances on the last two seasons of High Stakes Poker, The Game Show Network’s classic poker show. There, he played against the likes of Doyle Brunson, Phil Hellmuth, Daniel Negreanu and Tom Dwan at $300/$600 stakes with a $100 ante.

Mercier plays under the screen name “JasonMercier” on PokerStars and “treysfull21” on Full Tilt. Between those two accounts, he has $2.261 million in MTT cashes according to the online poker tournament database PocketFives.

Given the fact that Mercier himself claims he started playing online poker around 2004, it is very likely he used different, untracked accounts before the ones listed above. However, these are the first results of his that are available to the public.

During the Corona crisis in 2020 Mercier became an online WPT side event champion by taking down the $10k Online PLO High Roller on partypoker for $279,265.

However, in cash games, he’s down over $500K after 87,000 hands on PokerStars, according to a website that tracks high stakes online cash results.

Mercier was a Team PokerStars sponsored pro from 2008 to 2018. He decided not to renew his contract at the end of 2017 due to most of his time being consumed by his newborn son, as he wrote in a blogpost on PS’s website.

I’ve never been a big Christmas guy. I mean I get why everyone loves it… it’s always been more stressful for me than a joy. Having to get gifts for others, people asking me what I want etc… I know I sound like a grinch. But now that I have a family of my own… Christmas is so much more special than it ever was! Can’t wait to see this little guys face every December as he grows up! Merry Christmas everyone ! God bless

His feud with Doug Polk

In May 2016, Doug Polk was streaming a high stakes cash game session he was playing on PokerStars. Among his opponents at that virtual table was Jason Mercier.

The viewers of that stream noticed that Mercier is tagged as a “bad reg” – indicating that Polk thinks Mercier’s a bad player, despite his accolades on the live tournament scene.

Both Mercier and his wife Natasha got word of this and they publicly denounced Polk on Twitter.

In February 2017, Mercier took to the 2+2 Forums to level accusations of cheating at Fernando “relaxursoul” Rosas.

Allegedly, Rosas was either botting or manipulating the deal in a Pineapple Open Face Chinese Poker app many high stakes poker pros were playing at the time, including Mercier. They noticed that Rosas has a conspicuously high win rate despite the fact that when they were playing OFC against him live, he wasn’t very good.

Here’s some excerpts of Mercier’s allegations from his 2+2 post – once again, his wife Natasha is involved:

“Why I think u are somehow cheating (…)  No one beats u on the app =… ). U can’t win live- lost at pca. Lost in Vegas. Lost to Natasha in 5 different forms of ofc live (…) Natasha has told me massive mistakes you have made live.”