The first ever Vietnam Poker Cup reached it's conclusion today, with the Main Event drawing a very respectable sized field. Given the fact that Vietnamese nationals cannot enter, With over 60 runners in the Main Event for an inaugural series such as this represents a respectable turnout. There is every chance that the series will return, and the field sizes will continue to grow.

This left Sam Nee and Hai Minh Nguyen to battle it out for the title, and the prize money for 1st which was inflated by the additional USD$8,800 added by sponsor M88 Poker Asia. This additional money led to the players striking a deal heads up. A part of the prize still had to be played for though, and it was Hai Minh Nguyen who took the victory.

Originally from the USA, he has been living in Ho Chi Minh City for a long time and divides his time between running businesses, and his passion for poker. After receiving his trophy Hai Minh Nguyen said to Somuchpoker “I am extremely happy to end up as the last man standing after 2 days of poker. It was a great experience and I will definitely be taking part in the next event.

He took home USD$14,360 for his win, and as a Somuchpoker community member, also won the "Last In The Main" promotion.

The High Roller only attracted 8 runners, but still made for interesting viewing, as Norbert Koh, straight from 7th place in the Main Event, took his seat and ended up cashing in 2nd place. Heads up play came down to a coin flip in the end, with French national who currently resides in Ho Chi Minh City, Julien Thabault winning the event for USD$5040. 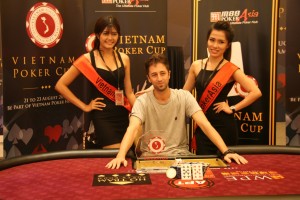 The Deep Stack Turbo attracted 22 runners, with only 3 being paid, was eventually won by a player who has recently relocated to Ho Chi Minh City, German online grinder Patrick Honsel. This final result of the series ensures that all 4 victors were players who now reside in Ho Chi Minh City. With the Vietnam Poker Cup's first instalment now complete, poker lovers in this part of the world will now await the APT Vietnam 2 series which is scheduled for the same beautiful Ho Tram location during November.