With the Philippines quickly becoming a destination for poker enthusiasts, the past few weeks alone has seen four exciting poker events take place in different venues around the bustling metropolis. On November 18-22, the Metro Card Club, hosted the RVS Cup; on November 27-December 3, the International Poker Open 3 was situated at Resorts World Manila; on December 1-6, PokerStars Live Manila held its fourth installment of the Manila Megastack at their hub at City of Dreams Manila; and currently running from December 9-17, the Asian Poker Tour Finale at the Waterfront Manila Pavilion Casino Filipino. Now what do all those events have in common?

The answer is Filipino player Edilberto Gopez. A seemingly quiet and unrecognized player, Gopez is considered a new face in the poker scene.

His name first appeared when he entered the final table of the RVS Cup Main Event last month. From there, he proceeded to make it to the heads up round against Filipino player Richard Marquez, and after a tough battle to the finish, Marquez got the best of it. Pumped up from his runner-up finish, Gopez returned to the poker arena for the IPO3 Main Event and picked up right where he left off. For most of the qualifying days, he stayed within average stack until his well-timed spots sent him into the chip leader’s seat for the final table. Facing some tough decisions at the final table, Gopez had difficulty holding on to his chips and had to settle for a 7th place finish while Filipino poker pro Lester Edoc went on to claim the trophy. 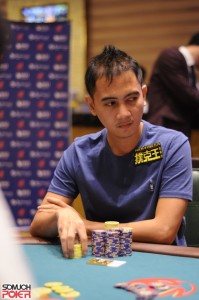 After a one-day break from the felt, Gopez was back at the poker room, this time for the Manila Megastack 4 Main Event. Alike his previous two accomplishments, he was at the final table facing a new set of adversaries. Despite having a good run, fellow countryman Joven Huerto got lucky against Gopez’s pocket jacks by landing a set with his pocket nines. Gopez exited in 4th place.

With three final table berths under his belt in just two weeks, there was no doubt that he was running hot, and how else was he going to ride this streak? By playing the next event on the block, the APT Finale 1M Guaranteed Welcome Event. With a massive field to overcome, Gopez grinded his way up slowly, table by table, until once again he earned himself a seat to the final table. At one point, Gopez had a slight chip lead against Korea’s Hyungtaek Jo’s seemingly indestructible stack, but after several big losses, he finished in 3rd place with eventual winner, Germany’s Sebastian Benz, delivering him his final hand.

The 2015 calendar year may be coming to a close, but with poker tournaments seeing a boom in the Philippines, we will definitely be keeping a close eye on this player as we expect to see more of him ruffling up the poker tables. Truly an impressive display of poker prowess!