Games have always been interesting in the way that they travel to distant places, and take root there, like a seed that has been stuck to the clothing of a traveller, hitching a ride to an unusual destination. They are ideas held within the human mind that can be shown and taught to others, and as such, they migrate with us. Earliest indications suggest that card games similar to poker sprung up in France hundreds of years ago, and reached the American continent through French Canadian settlers.

In the modern day, slowly but surely, a similar migration has been happening with poker in Asia. The ease with which information can be transmitted across the world has certainly played a part in poker taking root and flourishing in new places. The internet and television have played a central role, but we shouldn't underestimate the simplest and oldest form of information movement: Human travelling. Many people have a sense of adventure and hope to see other parts of the world, and there is no doubt that students and other travellers from Asia will have visited Europe and America, picked up this card game, and then brought it home with them. In a symmetrical way, when the game started to spread over the Asian continent, International players came from across the World and started to bring their own contribution to the Asian Poker Scene. We are looking today at this contribution.

It took a long time to international media to acknowledge the existence of a dynamic poker scene in Asia. If we have to name a turning point, it would be without a doubt “the Macau Big Game”. The 2+2 forums gave the first insight into poker celebrities travelling to Macau to play high stakes poker at Starworld Casino, in the form of Matt Savage who posted “the cash games are some of the biggest in history as Tom Dwan, Phil Ivey, Chau Giang, and John Juanda are playing HK$5,000-10,000 with some Chinese businessmen” This was back in 2010, and over the next 4 years or so, more international poker players with big reputations made the journey (Gus Hansen, Patrick Antonius, Sam Trickett…)

Poker Media reported that games got so big that the casino was once in danger of running out of chips. It was difficult to get accurate numbers, but stakes of USD$12.5K/$25K were mentioned, along with the suggestion that USD$1 million would be considered a short stack at the table. Details of these semi private games were hard to obtain and fuelled the myth around them. The presence of international stars raised a worldwide interest on the Macanese poker scene and made the prospect of a fabled journey to Macau seem more exciting for western players. Asia was on the poker map!

One of the few pictures of the Big Game available

It’s not well known that Doyle Brunson and Jack Binion made a brief appearance in Philippines in order to push local authorities to legalize the game in the country. With this new poker interest across Asia, there were always likely to be legal issues in certain countries, and nobody has worked harder than Wenceslau 'Wally' Sombero to change acceptance of poker in his country. As a retired police general in the Philippines, he could have easily been working against poker, but he saw the beauty in the game and gave a great deal of time to publicizing and legalising it in his home country.

In 2006 he was instrumental in arranging the first ever poker tournament in Asia, with the help of Jack Binion and Doyle Brunson, who travelled to the Philippines. In true Texan style, Brunson would only agree to the trip if he could be equipped with a gun in order to protect himself in this unfamiliar part of the world. Sombero happily arranged this for him, remarking “He thought there might be hooligans walking the streets and it made him feel more secure, so I arranged for him to have a piece. He even brought it with him onto the casino floor. He was in a wheelchair so went past all the x-ray machines with no problem.” Read more about Wally Sombero in our portrait.

In 2014 and 2015, the country saw a second Poker boom with PokerStars Live Manila, Poker King Club opening, the WPT arriving, and Macau cash games slowly moving to this new exotic location. World renowned players Phil Ivey, Daniel Cates, and Tom Dwan all made an appearance there. This summer, Daniel Cates made a public announcement on Twitter that he had been on a bad run, losing USD$5 million, which strongly suggests that the stakes being played in Manila were still as eye watering as they had ever been in Macau.

More recently, Michael 'The Grinder' Mizrachi was seen playing OFC Pineapple with David 'Chino' Rheem at Metro CArd Club. Thanks to this new visibility, Manila is now more and more considered as an international poker hub able to compete with Macau.

Vietnam has seen the beginning of its own poker growth alongside the rest of Asia, with the APT holding the first international event there this year, which attracted some famous Vietnamese/American players, including Nam Le. After the event, he spoke to the APT team about his joy at being able to play the game he loves, in the home country that he loves. Men 'The Master' Nguyen also participated in the first ever Vietnam Poker Cup earlier this year. These two players are not the only ones who have returned from the US and brought new life to the Vietnamese poker scene in the process. Home games and live events are filled with a growing numbers of American – Vietnamese players. 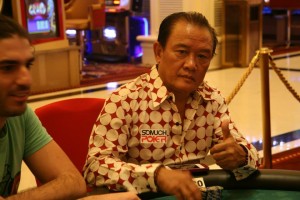 Men Nguyen during the first edition of the Vietnam Poker Cup

There are a number of factors that fuel poker migration, with 'Black Friday' being a very important change in poker acceptance within the USA. This resulted in many online pros from US shores seeking relocation, with Asian countries with great night life and warm weather, such as Thailand, becoming a popular choice. It is difficult to put an exact number on how many online poker migrants have travelled from the US to Thailand since 'Black Friday' but the thread about Thailand on 2+2 Forum has 3,600 pages, which tells a very clear story. Thailand hasn’t only attracted American grinders banned from PokerStars and Full Tilt. The lifestyle that American players enjoyed in Thailand has been advertised on poker forums and attracted several grinders from western countries. Fedor Holz, the 2014 WCOOP Main Event champion is one big name player who has relocated during period of time to Thailand, and there are certainly many others. Most of these players are not looking for the spotlight and are rarely advertising themselves locally as Online Poker pros. Despite this discretion, a growing number of these online grinders have been seen on the Asian Live Circuit which can only fuel the growth of poker in the area.

If legal restrictions regarding poker in Asia (especially China) are removed in the coming years, we can hope to see the Asian continent become more and more attractive as a poker destination to both professional and casual players.