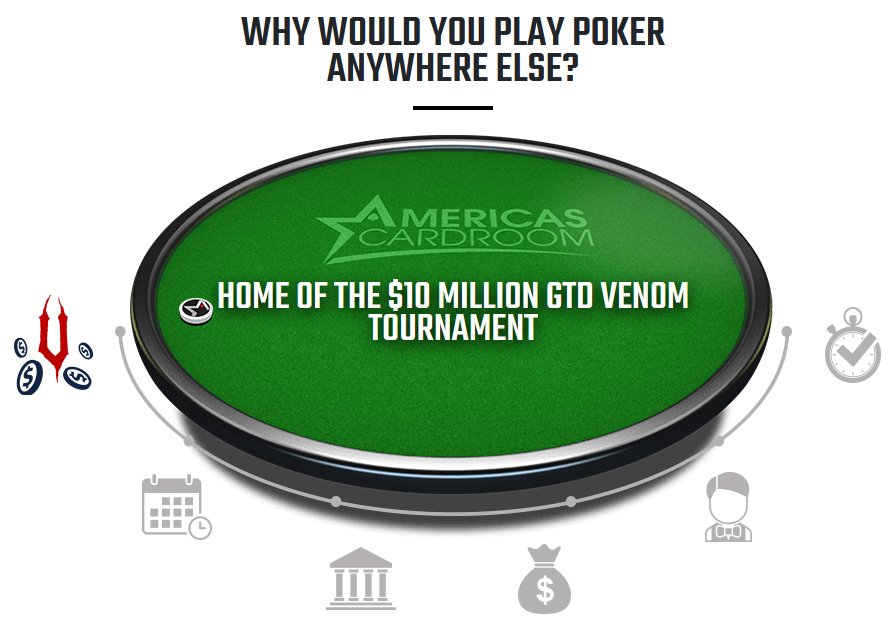 Americas Cardroom has brought the excitement of online poker back to the USA!
Americas Cardroom has grown rapidly over the past several years, bringing players back to the glory days of online poker in the U.S. through unique incentives and promotions. They are the only US facing site to offer a $7 Million GTD Venom poker tournament while hosting a weekly progressive rake race for both cash game and Sit & Go players.

As the flagship skin of the Winning Poker Network, Americas Cardroom has already grown into one of the top communities for U.S. poker players thanks to its no-nonsense deposits, quick payouts and high tournament guarantees. Players will receive a 100% first deposit bonus up to $500 (limited time offer) New Depositors are eligible to join the $250 New Depositor Freeroll. : Players are welcomed with a 100% First Deposit Bonus up to $500. This offer is valid starting December 7th for all deposit methods and is available for a limited time. No promo code is necessary.

Bonus details: The First Time Deposit Bonus is paid out in increments of $1 for every 27.5 in Award Points Earned. Award points previously earned do not count towards the bonus requirement. Players have 60 days to play the First Deposit Bonus through.

Start playing on ACR and Claim your Bonus! 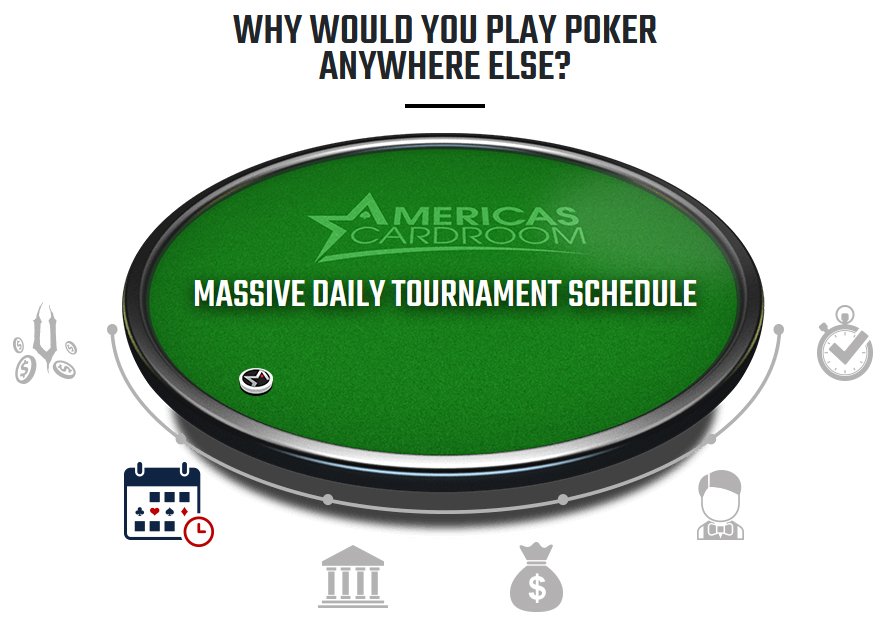 Americas Cardroom is giving the coronavirus the middle finger. There are 20 new Freerolls and Micro-stakes tourneys happening daily. Winners get a special FU COVID-19 mask in addition to their regular payout.

Bringing bigger action and pots at designated cash game tables. All players put in extra blinds. There’s no pre-flop betting so all players see the flop. After the flop, betting resumes normally.

These are special Jackpot Poker games that come with a buy-in of $5, $15 and $50. The difference is that instead of paying a top prize of $100,000, these pay a life-changing $1 Million. This promo is only available for a limited time.

Players don’t need a massive stack to play for big stakes with 7-Day No Rathole Tables. Available at a wide range of stakes, you can buy in for just 10 Big Blinds and are free to leave at any time. The catch is that if you leave a winner, you can only return in the next 7 days to the No Rathole Tables by buying in with the same amount you left with.

Every Sunday night at 6pm ET, players can win a trip to sunny Costa Rica to play in a $5,250 buy-in Live Cage Event. The $55 buy-in Beast and Sit & Crush Live Cage Satellite guarantees 2 weekly packages ($8,340 value each) which includes airfare, accommodations, and the buy-in.

Every Sunday night at 6pm ET, players can win a trip to sunny Costa Rica to play in a $5,250 buy-in Live Cage Event. The $55 buy-in Beast and Sit & Crush Live Cage Satellite guarantees 2 weekly packages ($8,340 value each) which includes airfare, accommodations, and the buy-in.

This unique weekly rake race awards cash prizes and tourney tickets to cash game grinders. This is on top of ACR’s lucrative VIP program and costs nothing for the player as a portion of the rake is funneled to the cash leaderboard. The more hands a player plays, the higher they rank on the leaderboard and the more cash they make. To date, The Beast has awarded over $20 Million in cash and tournament entries.

This nosebleed cash game in time-based tournament format plays every Wednesday at 7pm ET. Players may buy-in directly or qualify via satellites for this 5-hour $1,050+$50 buy-in event. The blinds increase each hour and whatever chips the player has at the end is converted to cold hard cash!

Spin to Get IN:

Starting at one cent! This is part satellite, part slot machine and is an easy way to gain entry into Americas Cardroom’s tournaments and Sit & Go’s. You can spin for 1 cent, 25 cents, or $1 and if you hit three-of-a-kind, you’ve won your seat.

What are Somuchpoker Rakeback Deals?

Rakeback Players: 27% Rakeback. The Rakeback reporting tool is located in the “Rewards” tab within the Poker Lobby. The Rakeback percentage is based on the net rake generated from Monday to Sunday.

How to join: Create your account now and get in touch with us to validate your tracking.

ACR’s loyalty program is simple. The second players start to play for real money on Americas Cardroom, they will automatically become a part of the program. The ultimate goal is to keep improving their rank in the program. There are five ranks—Lieutenant, Captain, Major, Colonel, and General. To players benefit, ACR uses the dealt rake method to calculate rewards, so earning points and improving ranks is easy.

Earning Points: When players play in a cash game with a qualified rake or in a tournament where a fee is paid, they will earn Rank Points (RPs) which determines their rank.

Players will also earn Combat Points (CPs) alongside the Rank Points. The number of Combat Points earned each month depends on the rank. A special Player Point multiplier is set for each military rank, the more a person plays – the more they win!

Combat Points are spendable currency at the ACR store. Combat points can be used to purchase cash bonuses, electronics, clothing and even a car!

Note: Rakeback players cannot participate in the Elite Benefits program, but are allowed a one-time switch.

Add us on Skype “somuchpoker.asia” or contact us Telegram if you need support!

Start playing on ACR with 27% Rakeback

Americas Cardroom’s software is bigger, stronger, and faster than ever before thanks to a major update in May 2019. The update (details below) was focused on the user experience from under-the-hood improvements to a whole new design. It will also allow for much quicker product updates in the future. 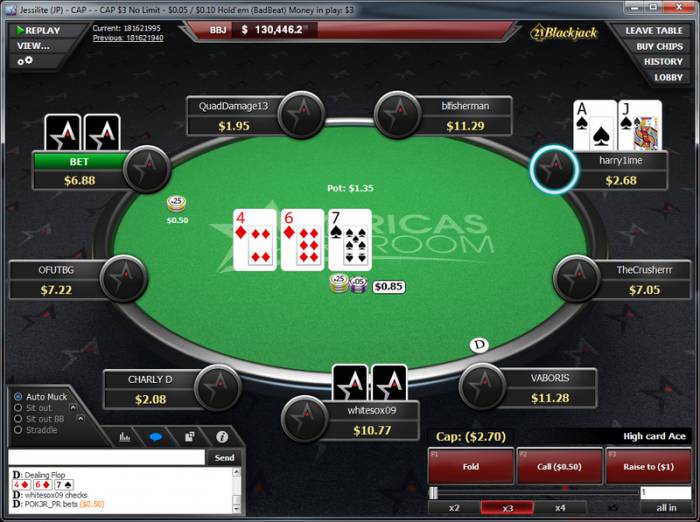 What are the Cash Game & Tournaments?

Start playing on ACR with 27% Rakeback!

24-Table, Multi-tabling Action. As one of the few if not only network left to support up to an old-skool 24 multi-tabling possible!!

Additional details: Multi-tabling: 24 Tables at a time and compatible with HEM and PT4.

How Secure is Americas Cardroom? 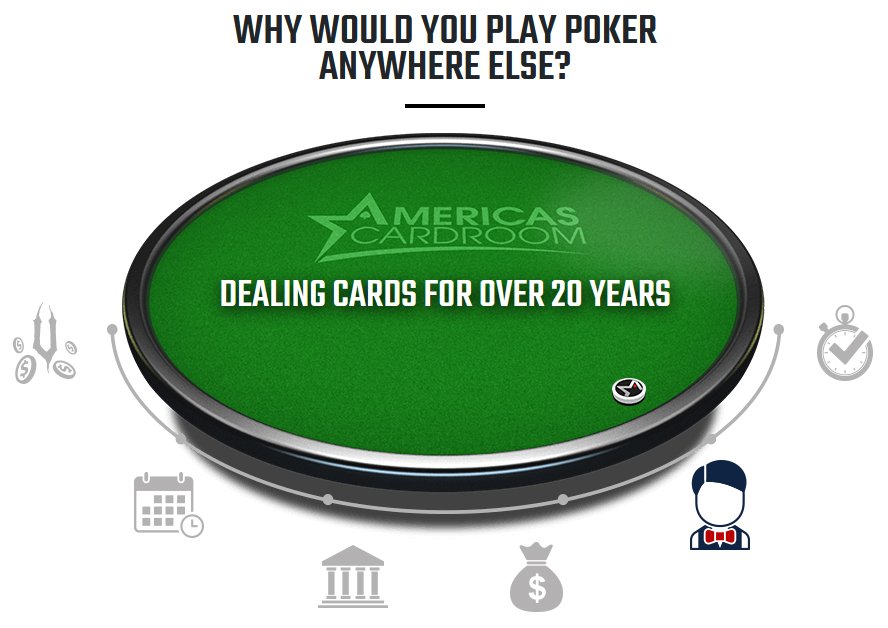 Security here is at the same level of major financial institutions. Staff work hard in making sure the games are safe and reliable, with anti hacking, and anti collusion procedures which are as strong as any. Customer support is available 24/7 via Phone, Live Chat, and Email.

Start playing on ACR with 27% Rakeback

Read more : Playing Online poker as an American in 2017