Rest of the World
August 4, 2015 by Louis Hartwell

Daniel has recently proven again that he belongs in the list with the top poker players and deserves to receive all of the acknowledgements that he has gotten over the years. He achieved a deep run in the 2015 Main Event at WSOP 2015, surviving until Day 7 and closing in to November 9, but unfortunately he missed it by a whisker. Nevertheless, he is ranked number 1 on the All Time Money list with total winnings of more than $30,000,000. This is a genuine reflection of his success in poker, but why do so many people follow his career and cheer him on?

#1. How Daniel came to poker and earned the name “Kid Poker”

Born in 1974 in Toronto, Daniel discovered his passion for Poker at the age of 16. He had an affinity for dealing with numbers and probabilities, which is a good sign for someone who wants to become a poker player. Negreanu’s first love was pool  but he appreciated the challenge poker offered and after finished high school, he became a full-time poker pro. The young gun was competing with adults who were way older than him, but even though Daniel was inexperienced, he kept winning. As time passed, his bankroll grew and grew.

When he turned 21 and had gained enough confidence to take a big step, he decided to pack up his things and travel down to the City of Lights – Las Vegas. Daniel would not be Daniel if he’d surrendered after he lost his entire bankroll and failed at his first attempt to sustainably live and beat the games in Vegas. He travelled back to Toronto, and, instead of giving in and seeking another destiny, he worked his ass off to rebuild his bankroll in order to make another attempt. All the effort—all the hours, nights, and days he spent playing and theoretically studying the game—paid off well one day. He fixed his leaks, and he figured out how to play to beat the games in Vegas. On top, he won 2 Events at the World Poker Finals in 1997 and was considered to be the best all-around player at that time.

In 1998, Daniel entered his very first World Series of Poker event. He won a $2,000 Pot Limit Hold ‘Em event, and, at the age of 23, Daniel became the youngest player ever, at the time, to win a World Series of Poker bracelet. The win brought Daniel the nickname “Kid Poker.” Daniel has kept this name ever since. When you open the high stakes tables on PokerStars and you see “KidPoker” playing, you know it’s him.

Not arguably (as some might suggest) but most definitely, Daniel had his most successful year in 2004. Daniel made his way up to 11 final tables, which included two WPT victories and his third WSOP bracelet in Limit Hold’em. His total winnings climbed to a staggering number of $4,456,907. In addition to his outstanding performance at the tables, he was honored with the awards of WSOP Player of the Year, Card Player Magazine Player of the Year, and, at last, WPT Season 3 (2004-2005) Player of the Year. The staggering amounts he won allowed him to sit down at the Bellagio and play the biggest cash games on a regular basis. When we say big, we mean really big, with blinds up to $4000/$8000.

When all the top-notch players like Tom “durrrr” Dwan, Doyle Brunson, and Phil Hellmuth take a seat, Negreanu ain’t supposed to be missing, and so he was literally the only one who accompanied the tv show “High Stakes Poker“”through all of their 6 seasons. Unfortunately, Daniel had a curse attached to him throughout all of the episodes. He ended up being the biggest loser of High Stakes Poker with a total loss of over $2,000,000 in 881 hands! No one else lost more than $500,000. 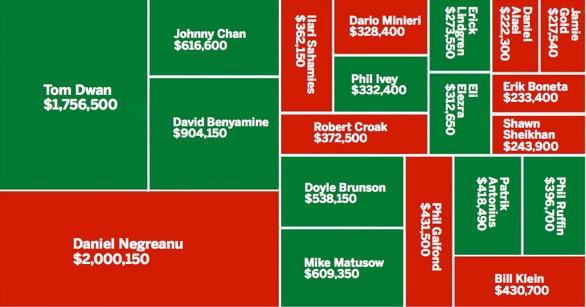 The Canadian said in an interview that it was great fun to play as many amateurs as were sitting at the table, all of whom were willing to gamble, throwing big bricks of money into the middle. Opposition changed in Season 4 when a large portion of the amateurs were replaced by young professionals and online whiz kids.

Daniel made poker headlines by tweeting that he’d be a winning player at $25/$50 6-max No-Limit Hold’em games, given two weeks of time for practice and studying. He was so confident that he bet $1 million on it. He received immediate attention from the Online High Stakes Poker World, particularly from Doug Polk, who attempted, along with other online pros such as Dan Colman, Ben Sulsky, Ryan Fee, and Brian Hastings, to take on the challenge and bet against Daniel. But both sides never agreed to the right terms.

About Daniel’s challenge, Doug “WCG Rider” Polk said in an interview: It never came to a bet because Daniel got more precise about his terms and off what he had originally said. Later on in the interview, Polk explained, Apparently, what Negreanu meant was that he’d be given two weeks of study, and then get a whole year to beat $25-$50, along with another year of play if needed, with some consequences or something. So, the question is, am I willing to bet against Negreanu beating $25-$50 over the course of two years while cherry-picking his spots and getting coaching? No, of course not. But that’s not what he originally said. The terms that I think are reasonable for the bet, he would never agree to.

Daniel Negreanu’s love life and his poker life have something in common:  His list of cash prices and tournaments is comparable to the length of the list of all the girls he’s had. You might argue that the difference is that quality in poker comes through quantity of accomplishments but quality in love, at leastin the old fashioned sense, comes from getting married, having a couple of kids, buying a house, settling down with a family pet, and staying together until the end of time. Sounds romantic, but instead of his continuous rise in poker, his love life, expressed on a graph, looks more like a rollercoaster that goes up and down and up again. He has only been married once, but the marriage only lasted about 2 years. He has gone through many on and off relationships throughout the years, seeming to prefer to date poker celebrities.

According to the media, he discovered his interest for women at the same age that he became enthusiastic about poker—at the age of 16. Negreanu dated fellow Canadian poker pro Evelyn Ng. The two have had an on and off relationship that goes back to when Ng was 16 years old. They met at a pool hall when they were both pool players. She still lives in Las Vegas and has been mentored by Daniel from then until now.

Evelyn Ng talks about her life with Daniel Negreanu

Later on, Daniel Negreanu married Lori Lin Weber, a Grand Rapids, Michigan girl, on August 19, 2005 in Las Vegas. A post-reception party was held at Le Bete, a nightclub at the Wynn Las Vegas that has since been closed. Daniel maintained such a good, friendly relationship with his former flame, Evelyn Ng, that she even attended Lori and Daniel’s wedding. Daniel and Lori got divorced in November 2007. The divorce didn’t arouse much media attention because, reportedly, they found a way to split up in a reasonable and fair way and did not need any lawyers to settle the details. As is quite common in the celebrity world, heblamed the divorce on his busy schedule, though he also said that he could be “pretty demanding” at times, according to Daniel Negreanu’s ex-wife.

Post-divorce, Negreanu has been linked to a number of poker celebrities and hangers-on, including rumors of romance with American Pie hottie, Shannon Elizabeth. We do know that in 2010, Negreanu dated poker media darling Amanda Leatherman. Leatherman had been on and been the host of the PokerStars.net “Big Game” poker telecast. She was also the host for Season 7 of the World Poker Tour, and she filled-in during broadcasts in 2013.

Few years later he started a relationship with Krisztina Polgár. She is a Hungarian celebrity who won the prestigious beauty contest “Miss Earth Hungary 2008”. The relationship ended up quickly and according to the rumors the Hungarian beauty may have broke his hearth.

In 2013, Daniel took part in the reality dating show “the Millionaire Matchmaker”. Seeking love, Daniel appeared on a January 2013 episode, in which wealthy bachelors and bachelorettes were introduced to potential mates. He was eventually paired up with an attractive blonde named Lindsay Blalock. However, within weeks, the relationship seemed to not have worked out. Thus, he announced via Twitter that they were “just friends”.

Daniel Negreanu’s new and current girlfriend:  In 2014, Daniel was dating with Las Vegas hairstylist Marissa Rachelle Rodney. He met her at a charity event. According to an interview, they have been together since January 2014. Daniel Negreanu’s age is now 43 years old : time to finally settle down ?