Known as ZeeJustin to those who follow him online, Justin Bonomo was born on September 30, 1985 and spent his formative years in Virginia. Formerly 1st on the All-Time Money List with over $45 million in live tournament cashes, he was dethroned by Bryn Kenney during Triton London in August 2019.

Bonomo’s obsessive study of his opponents’ hand histories and playing styles is well known, and this concentrated and particularly analytical approach to playing poker has definitely served him well.

Bonomo has been an avid gamer since childhood. The first game he fell in love with was Magic: The Gathering, which he started playing when he was 9. By the time he was 12, he was competing in the top Magic tournaments around the world.

Although the prize pools for Magic were often worth up to $250k, Bonomo soon realized that a lot of Magic players were also making pretty good money playing poker online. He decided to give it a try too, but he found it difficult to build his bankroll. Unexpectedly, a Magic tournament in California proved to be a turning point in his poker career.

While at the Magic tournament, Bonomo watched some of a WPT on TV and got caught up in the live action. Reinvigorated to play more poker, he bought a few books and read them on his flight home to Virginia, where he began to approach his poker game with renewed focus and motivation.

At 16, he started playing online poker seriously. He sold an MMORPG character (Everquest) for $500, which he deposited on Paradise Poker. Continuing his intense study, he worked his way up the ranks at PartyPoker. Eventually, he built his bankroll to about $10k.

In September 2004, he made his debut in live play when he competed in a WPT event in Aruba. Although he failed to make it to the second day of play, he learned a lot that he brought back to a much more successful second attempt.

On his second attempt at the 2006 PokerStars Caribbean Adventure, Bonomo came in 30th place, earning him $15,600. However, being under 21 and living in the US made it difficult for him to find live games that he was legally allowed to play in. Needing to find a way to hone his skills, he turned to the only option available and headed to Europe, which turned out to be a great move for him.

In February of the same year, he took 4th place at the French Open, becoming the youngest player ever to make a televised final table. That moment marked his breakthrough moment, as he went on to sit at many final tables, including at the World Poker Tour and the World Series of Poker.

In 2018, he was ranked among the top players on the Player of the Year Index.

I'll be battling @nanonoko tomorrow in a @gpl match to the death. Or points or something. IDK pic.twitter.com/ktWZ875Iyu

Bonomo used to have an account on partypoker, where he was known by many for his ability to play on 12 tables simultaneously and to play 12-hour straight online poker sessions. His cunning ability to dominate Sit&Go poker at partypoker often involved playing eight $200+15 Sit N Go tables at once. At the peak of his online poker playing, he visited the $1k Sit&Go’s and played 8 at a time. According to Bonomo, he netted about $400/hour when he played like this.

“For me it’s really fun to play against the same player for 3,000 hands straight. You get to really analyze every aspect of his play, every single decision you make is so important heads-up. You really have to figure out every aspect of your opponents play and I enjoy that.”

However, following the total crash of his online career in 2010, he basically stopped playing on FullTilt. The online high stakes cash game database has 105,000 hands tracked on his FT account, which shows a $1.167 million loss. 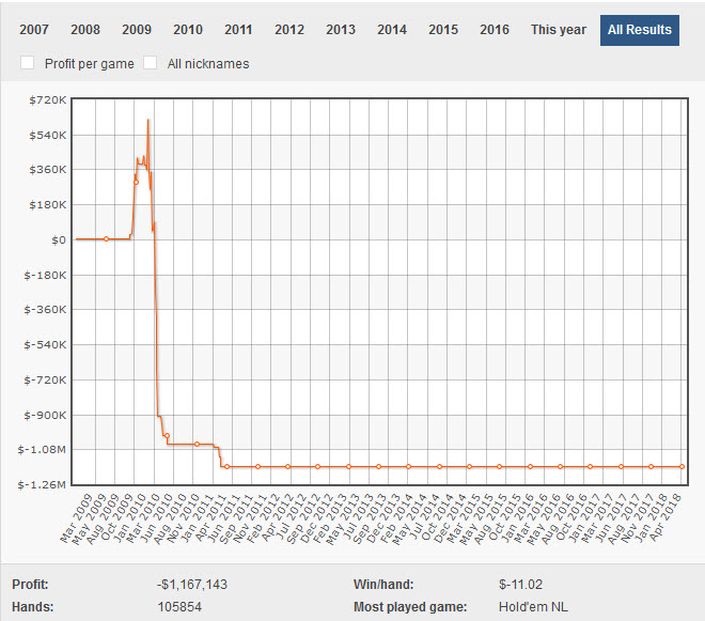 Following the Black Friday fiasco, Bonomo headed to Malta and found better results playing on PokerStars, eventually joining the ranks of the SuperNova Elite. In 2015, he concluded that big live cash was a far better score for him. 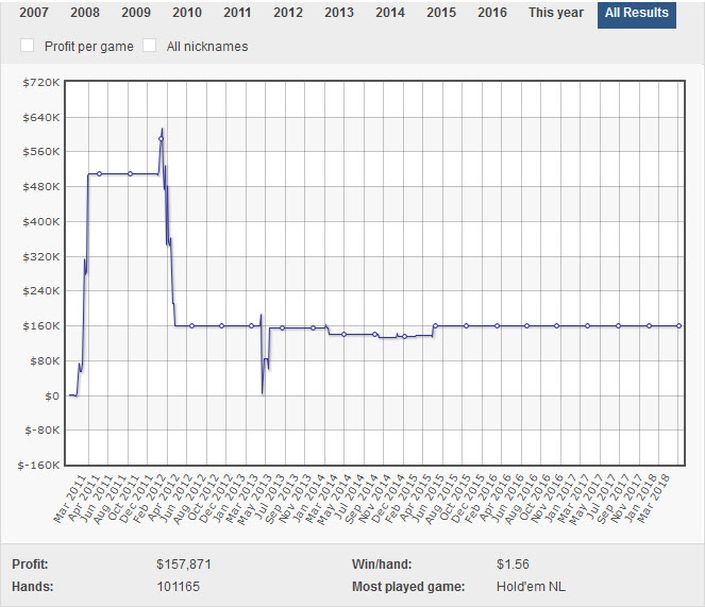 In January 2021, he took down the $1,050 Sunday High Rollers Main Event for $99,798 on Natural8-GGNetwork. Interestingly, he triumphed at the end by knocking out every single player at the final table.

Not sure if I’ve ever done this before, but I just busted every other player at the final table to win this 1k. Fun day! pic.twitter.com/jcV2ZLhIcZ

From 2008 to 2010, Bonomo joined David Williams, Evelyn Ng and Jean-Robert Bellande as a member of Bodog Poker’s online pro team.

Parrtypoker accused Bonomo of multi-account cheating in 2006. Exploiting a bug in their software enabled him to open multiple accounts at once by rapidly clicking the partypoker icon. Once they proved that he had indeed done this, partypoker confiscated $100k from his account, which equaled approximately the same amount that he had made the week before when he won the Big Sunday $600+40 partypoker tournament. After a thorough investigation of his account, partpoker concluded that his winnings from the Big Sunday tournament ($137k) were legitimate.

After the investigation, Bonomo publicly apologized for his actions and added a public statement to his website explaining how wrong he felt his behavior was but arguing that he believes that the poker site1s response was blown out of proportion. While many of his followers support his argument that partypoker overreacted to the situation, others were more than a little disappointed in him.

Prahlad Friedman accused Bonomo and his friend Isaac Haxton of account sharing in 2011, but they have both vehemently denied the accusation. Instead, they’ve suggested that Haxton may have been coaching Bonomo and the situation was misunderstood.

During the Super High Roller Bowl in 2016, Bonomo refused to show his hole cards on the televised game, which earned him the ire of several players who openly criticized his decision. Indeed, Leon Tsoukernik took the criticism a step further, calling Bonomo “a scandal person” and suggesting that he should be disqualified.

After winning an EPT Monaco Satellite Event in November of 2016, Bonomo refused to take an official photograph because he claimed that PokerStars “stole” $50k from him in rake when they failed to honor the previous SuperNova reward system through the conclusion of the 2016 calendar year. However, he gave in to the request once it was pointed out to him that the tournament rules legally bound him to oblige to the photo request: In his short life as a blogger, Bonomo created only two posts on the BlogSpot account he opened in 2015: one that narrated his Burning Man Festival experience and a second taking a stand against “Sexism and Misogyny in Poker“. In this post, he wrote, “An inexcusably large percentage of male poker players treat women like shit.“

He followed up on this indictment of sexism in poker in 2016, when he reported other players’ inappropriate behavior during a tournament. Using Twitter to report what he witnessed at the 47th Annual WSOP, he logged instances of “microaggressions,” which he defined as a “subtle but offensive comment or action directed at a minority or other non-dominant group that is often unintentional or unconsciously reinforces a stereotype.”

For these opinions of his, some in the online poker community dislike him intensely and brand him as a “Social Justice Warrior”.

Most recently, in response to the #metoo movement in 2017, Bonomo declared his support for the cause via social media and publically apologized for his own role in perpetuating sexist stereotypes and sexually aggressive behaviors: 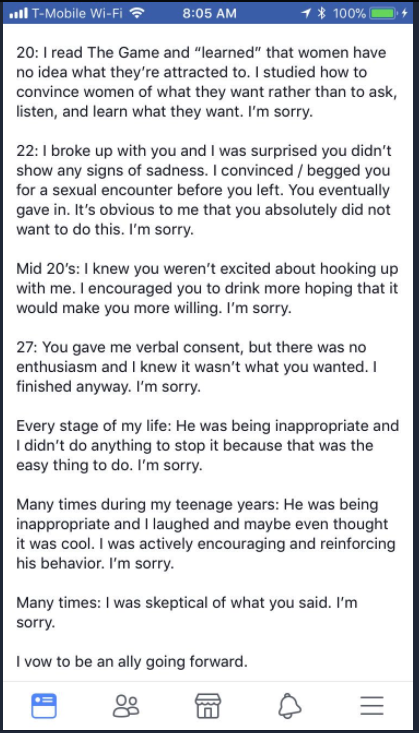 “I’ve watched girlfriends play with other people before, and it’s something I actually enjoy, it turns me on, I’m not possessive at all.” Moreover, he’s stated, “To me, that’s the strongest bond, when you can be emotionally intimate and sexually intimate with them, and you can still talk about other relationships with other people, that’s a really strong, powerful connection“.

Bonomo lives in Las Vegas, but he generally enjoys a more quiet life, rather than the party life the city is known for. Prior to 2018, when he moved, he lived in Panorama Towers, which is a three-building complex that houses over 70 professional poker players, including Barry Greenstein, Joe Sebok, David Williams, Adam Junglen and the Binger brothers, Michael and Nick. He is close friends with Haxton and Seiver. So close, in fact, that they all used to have a piece of each other’s action.

All moved in to my new apartment in Vegas pic.twitter.com/AtUOJpLo0O

In a 2010 interview with Bluff Magazine, Bonomo said claimed that while he rarely goes out to night clubs, he does revel in all the wonderful food options available in Vegas.

Besides poker and great eats, Bonomo enjoys playing video games (particularly Heartstone and Street Fighter), meditating, and listening to live music. He can frequently be found at alternative rock concerts.

@bmkibler 9 mana left, what should I spend it on? pic.twitter.com/tZDrNt2aO9

Morning meditation in the Japanese gardens of Monaco to prepare for a long day of poker. A passerby took this photo of me and sent it to me a few days later when I ended up at his table pic.twitter.com/xSIJxa8qxD

Although he hasn’t publically expressed an interest in any particular philanthropic ventures, Bonomo did donate $13,250 to the SENS project, which is a life extension research project for the elderly.